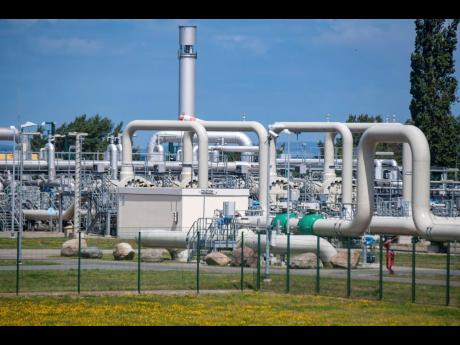 AP
Pipe systems and shut-off devices at the gas-receiving station of the Nord Stream 1 Baltic Sea pipeline and the transfer station of the OPAL long-distance gas pipeline in Lubmin, Germany, seen on June 21.

Germany’s vice-chancellor said on Thursday he suspects that Russia may not resume natural gas deliveries to Europe through the Nord Stream 1 pipeline after planned maintenance work in July, complicating the outlook for this winter.

Russia reduced gas flows to Germany, Italy, Austria, the Czech Republic and Slovakia this month, just as European Union countries scramble to refill storage facilities with the fuel used to generate electricity, power industry, and heat homes in the winter.

Russian state-owned energy giant Gazprom has blamed a technical problem for the reduction in gas flowing through Nord Stream 1, which runs under the Baltic Sea from Russia to Germany. The company said equipment being refurbished in Canada was stuck there because of Western sanctions over Russia’s invasion of Ukraine.

German leaders have rejected that explanation and called the reductions a political move.

Vice-Chancellor Robert Habeck, who is also Germany’s economy and climate minister and responsible for energy, said a “blockade” of the pipeline is possible starting July 11, when regular maintenance work is due to start. In previous summers, the work has entailed shutting the pipeline for about 10 days, he said.

“But given the pattern we have seen, it wouldn’t be so super-surprising if some little technical detail is found and then they say, ‘We can’t switch it on again; now we found something during maintenance, and that’s it,’” Habeck told a forum organised by the Sueddeutsche Zeitung newspaper.

“So the situation is certainly tight,” he said, stressing the importance of filling storage and getting liquefied natural gas terminals up and running. At present, Germany is continuing to store gas, albeit at about half the rate it was before deliveries through Nord Stream 1 were reduced, the vice-chancellor said.

A week ago, Habeck activated the second phase of Germany’s three-stage emergency plan for natural gas supplies, warning that Europe’s biggest economy faced a “crisis” and storage targets for the winter were at risk.