Artist trades bags and boots made from straw 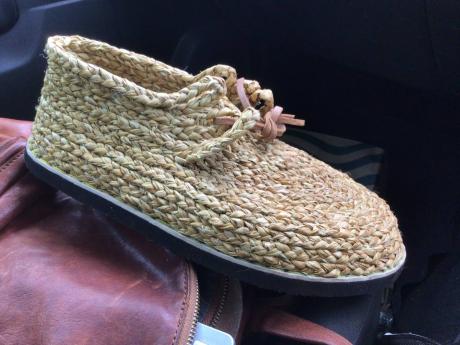 In the quiet turns of Tranquillity in Portland, near Buff Bay, artist Jeremiah ‘Miah’ Samuels displays his duffel bags, caps, and boots made from straw. Straw products are usually made in the form of mats and brooms, and of course large beach hats...

In the quiet turns of Tranquillity in Portland, near Buff Bay, artist Jeremiah ‘Miah’ Samuels displays his duffel bags, caps, and boots made from straw.

Straw products are usually made in the form of mats and brooms, and of course large beach hats. Samuels, 67, can make those things too, but he and a few others are expanding the possibilities of the material. In the process, he’s adding value to his sole trader enterprise.

He makes a good return on sales as the largest cost is his time and labour. He sources the straw largely from the surrounding community.

Samuels realised that diversifying made sense because he earned less profit from mats that require “more straw to make” than other products. But he also charges more for the bags, boots and hats. Mats sell for $2,500 but caps sell for roughly $5,000 and boots $10,000.

“But boots are going to be $20,000 for big-feet people,” said Samuels in an interview with the Financial Gleaner. “That’s going to take more material and time.”

The trade-off for less material is the time required to make the higher-end products. The hat takes more time to make than the bags, the boots take more time than the hats, and so on.

“It takes about four days to make a duffel bag versus less than a day to make a mat,” Samuels said.

The Financial Gleaner was unable to locate data on the craft industry. None of the usual sources for trade and production statistics reported a dollar value for the craft sector.

Samuels seems to represent one of the few adding value to traditional straw products, according to a representative of the Jamaica Business Development Corporation, who requested anonymity as the person had not been cleared to speak with the press by the state-owned agency. JBDC operates as a support agency and incubator for micro and small business ventures.

“I want to contact him myself,” said the person, after examining samples of the Miah products in the Financial Gleaner’s possession.

Samuels operates Miah’s Craft, which is short for Jeremiah’s Craft. He sells his craft at his house, at events, and through merchants. One of those buyers onsells his products on e-commerce sites.

Since the onset of the pandemic Miah sales have taken a hit, starting from the closure of borders in 2020, but they are now recovering towards pre-pandemic levels. Online sales are sporadic. During the slow periods, Samuels says he “goes to the jungle to farm” .

“Things are a bit slow now,” he said. “I know personally that if I had a business place or shop, it would be better.”

Samuels is considering opening a store somewhere in Portland to drive sales.

“I have taught a lot of youth this art of straw making, and they are still around. They are still here. So if something comes up, we can get persons to fill the order,” he said, were Miah to scale up from a sole proprietorship.

Samuels started experimenting with making boots and other straw goods in the 1980s. At that time, he sold his boots at a store in downtown Kingston that was owned by a musician. That store eventually closed and he focused on selling elsewhere.

“I have been building shoes for 40 years now. But, you know, nothing happens before its time,” said Samuels. “From I was young, I wanted to do something creative.”