Main Event bullish on recovery, sees live events getting bigger than before 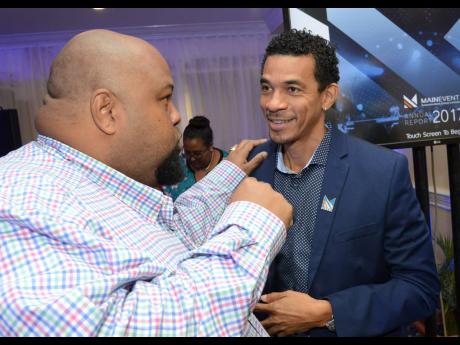 The record crowds at live events, even with reduced purchasing power, signals that the entertainment sector is on its way to recovery from the pandemic, according to Main Event Entertainment Group, a large promoter which provides stage equipment...

The record crowds at live events, even with reduced purchasing power, signals that the entertainment sector is on its way to recovery from the pandemic, according to Main Event Entertainment Group, a large promoter which provides stage equipment rentals.

The company also wants to expand regionally, but continues the search for opportunities.

“All the events held so far since COVID-19 have all been bigger than pre-COVID-19. Remember people were pent up for two years. So, at Sabina Park which would normally have 3,000 to 4,000 people now has 8,000 people,” said Main Event’s chief operating officer, Richard Bair, at the annual general meeting held at the AC Marriott Hotel in St Andrew.

“So going forward, everybody is going back to live events – Sumfest, Jamaica Rum Festival – and we are being engaged for another large festival in December. So, everybody is coming back to live outdoor events. I do not see it going down, [the sector] will only get better as time goes along,” Bair said.

The two years of pent-up demand for entertainment events come as Jamaicans are feeling higher commodity and consumer prices. It means that as inflation climbs the real value of the consumer dollar and the amount of goods and services it can buy continue to decline.

But for now Jamaicans are partying.

Main Event earns over half its revenue from staging live events on behalf of clients. The company’s executives explained, however, that the margins on live events are smaller than that of its other revenue streams, including digital signage and some weddings that it handles through its M Style business unit.

To grow its revenue base even further, Bair said that the company wants to expand in the region, but explained that there are logistical issues with hunting down projects.

“In terms of executing events in the Caribbean that is harder because we have to hire technicians. Having the equipment and dropping it in the island is not easy because you need the technical skills as well,” Bair said.

Previously the company executives cited that the measures to stem the spread of the pandemic had slashed the size of the entertainment sector in half. Main Event itself suffered a decline in revenue from $1.8 billion in 2019 to $1.05 billion in 2020, to $758 million in 2021. It led the company to find ways to operate more efficiently.

“We downsized the operations and things we thought were necessary we could do without,” said Finance Committee Chairman Dr Ian Blair at the meeting on Thursday. “One thing this pandemic has taught us is how to survive,” he said.

During the pandemic, the company moved its head office from the expansive Lady Musgrave Road to more affordable space at Ardenne Road in St Andrew, saving on lease costs in the process.

It has also paid down some of its loans, with borrowings last estimated at $99 million in March compared to $131 million the year before that.

In 2020, the Jamaican economy contracted by one tenth overall, with the entertainment sector contributing to the drag with a 23.5 per cent decline to movement and gathering restrictions and other measures imposed under the Disaster Recovery Management Act, or DRMA, to contain the spread of the deadly coronavirus.

Additionally the Planning Institute of Jamaica reported in its flagship annual publication, the Economic and Social Survey of Jamaica, that based on consumption tax receipts, sales from the entertainment sector, dropped by 54 per cent due to the fallout – affirming the claim made by Main Event.

The Government withdrew DRMA earlier in the year, leading to a flood of entertainment events. Main Event reasoned that as the effects of the pandemic recede, the company will capitalise on the resurgence of demand for events.

“Things are looking very positive. We just finished the Rum Festival which was a huge thing for us. We executed 90 per cent of the things on the ground. You are talking about 20 trailer loads of assets on the ground,” said CEO Solomon Sharpe in response to queries at the annual meeting. “We are going back to core events which will deliver better margins for us – Sumfest, carnival – and also we have new clients that came on recently,” he said.

Main Event’s financials reflect the resurgence. Its second quarter performance for the period February-April, shows the company spun from a loss of $27.6 million to profit of $20.8 million, while revenue improved from $174 million to $291 million.