‘Snatching milk from the mouths of babies’ 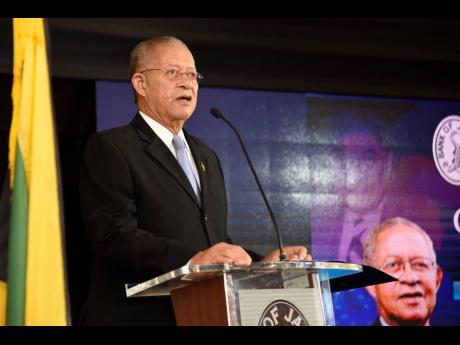 Former Prime Minister Bruce Golding has delivered a sharp rebuke of private sector interests that have been vocal in their criticism of the central bank’s consistent increases in interest rates since September last year, as a monetary policy response to rising inflation that has overshot the country’s statutory upper limit for several consecutive months.

Invoking the words of the former public servant, who in the 1950s also headed the Central Planning Unit, the forerunner to the Planning Institute of Jamaica, Golding drew on a 1976 speech by G. Arthur Brown to the graduating class of the University of the West Indies, that he said likened the advancing of sectoral interests that would will inflict economic loss on the rest of the society, especially the poor, to snatching milk from the mouths of babies.

The former prime minister, who headed the government from 2007 to 2011, also used the analogy of a hurricane threatening a house, to underscore the central theme of his lecture, that economic stability and growth in Jamaica required a consensus involving government, the parliamentary opposition and civil society.

“When the winds of a hurricane are beating down on the house and the kitchen and the living room are flooded, it makes no sense for the occupants to start quarrelling with each other as to who would have put on sturdier hurricane straps or who would have caulked up the door bottom better, or bailed out the water faster. Instead, we must all get busy to save the house and protect the furnishings, because it is the only house we have,” Golding admonished, as he delivered the third G. Arthur Brown memorial lecture named in honour of the former BOJ governor and financial secretary, from the auditorium of the Bank of Jamaica.

“The private sector also occupies that house and it cannot be seen to be only concerned with the bedroom that it occupies, because that bedroom will be of no use if the house collapses,” Golding said.

Chiding those persons in the private sector who, he said, have lambasted the BOJ for its policy rate increases urging the central banks to leave rates alone, Golding posed the question of what would be the correct policy response to rising inflation.

“Then what is to be done with inflation? Run with it? And these are leaders in the private sector: People who I thought would have had a keener sense of economics than I was ever able to learn at university because they have to live it every day,” he said.

He noted that as the country battened down to weather new economic storms such as the fallout from the COVID-19 pandemic and inflation, among the important lessons that should guide national recovery and the way forward was the necessity of economic policy consensus and continuity. He added that to the credit of both the government and the opposition, and reminiscent of the 1950s and 1960s, such a consensus has held since the period following the global economic recession of 2008, despite general elections and changes of political administrations.

“This consensus must not be allowed to be compromised by quarrelling over its implementation and management. The hardships being felt by the people because of rising prices and slowdown in job creation that is likely to result from higher interest rates and the shelving of investment projects, are real. (The situation) provides political opportunities and the temptation will be there to kick up a rumpus and destabilise the programme,” according to Golding.

“Times of instability, like this one, inevitably undermine business and consumer confidence. We don’t need to worsen that by fertilising doubt as to whether we are on the right track and whether we should change course,” he cautioned.

The former politician is urging the government and opposition, in the discharge of what he said was their crucial responsibilities, to confide in each other, huddle in dialogue and reaffirm and strengthen the consensus.

“The macroeconomic stability that prevailed up to and during our first decade of Jamaica’s Independence, when the economy was humming, was vitally important then. Today it is indispensably necessary,” Golding asserted.

He noted that during the period of robust economic growth in the Jamaican economy in the 1950s and 1960s, external loans were easily raised on the London capital market, backed as they were then by the pooled balance of payments surpluses of Britain’s colonies. Today, he said, foreign loans are raised through highly marketable instruments in equity and bond markets all over the world that pay close attention to Jamaica’s macroeconomic fundamentals and their projections for the future.

He cautioned against returning to policy options that have hurt the economy in the past.

“Although we have done well in recent years, the market knows our past and it is constantly looking out for the slightest signal that we might slip back into our old ways. Certainly there must be sufficient flexibility in the programme to allow for adjustments to meet extraordinary circumstances such as have arisen over the last two and half years, but we must not allow the poor visibility created by the haze and dust of these circumstances to cause us to take our eyes off the prize,” Golding warned.

“If we pull together, we will protect the gains we have achieved, validate the sacrifices we had to make and ensure speedy recovery and resumption of our momentum,” he suggested.

Golding conceded that, judging by the anaemic levels of growth recorded in the economy over the past few years, it was clear that while macroeconomic stability was essential, it is not sufficient to ensure growth.

He said that economists like Brown and Caribbean economic theorist Arthur Lewis, who had put forward the ‘industrialisation by invitation’ model of economic development, had, during their time, recommended that the route to high levels of economic growth was through economic consensus and a highly trained and educated workforce.