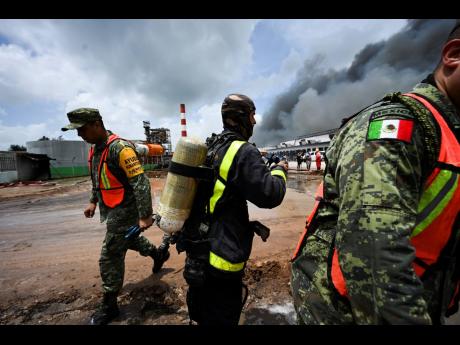 AP
A Cuban firefighter stands between Mexican soldiers as they work to put out a deadly fire at a large oil storage facility in Matanzas, Cuba, on Tuesday, August 9.

A deadly fire that consumed at least half of a large oil storage facility in western Cuba and threatened to bring more power failures to the island’s already-fragile electricity system was largely controlled on Wednesday after nearly five days, authorities said.

Flames that recently consumed the fourth tank in the eight-tank facility in Matanzas were almost quelled, although the third tank remained on fire and surrounded by smoke, officials said.

Colonel Daniel Chávez, second in command at Cuba’s firefighting department, said the fire could keep burning for the next couple of days, but he did not expect it to spread further. He said the next step is to cool the area.

The blaze killed at least one person and injured 128 others, with 14 firefighters still reported missing and 20 people hospitalised. The fire also forced officials to evacuate more than 4,900 people and shut down a key thermoelectric plant after it ran out of water, raising concerns about a new round of blackouts in addition to the ones the government announced last week for Havana.

Arturo López-Levy, a politics and international relations professor at Holy Names University in California, said the fire will complicate an already-difficult scenario in Cuba.

“I think any realistic forecast would point to more blackouts and more difficulty in carrying out the minimum economic activity in the country,” he said.

López-Levy also warned that it would be difficult “to lift up this country after this triple tragedy,” referring to the United States sanctions, the pandemic, and now the fire.

Some Cubans worry the blaze could lead to more planned power outages as the government grapples with a fuel shortage.

“That gives way to more justification of blackouts that are going to occur,” said Pedro Pozo, a state worker.

Cuban President Miguel Díaz-Canel praised the work by local firefighters and special teams sent by Mexico and Venezuela that employed boats, planes and helicopters to fight the blaze, whose billowing, toxic smoke could be seen from the capital of Havana.

“(Tuesday) was a victory day, but we cannot be overconfident,” the president tweeted on Wednesday as he warned about a possible switch in the wind direction. “Danger is lurking.”

The fire at the Matanzas Supertanker Base began last Friday when lightning struck the key infrastructure, which operates an oil pipeline that receives Cuban crude oil that powers thermoelectric plants. It also serves as the unloading and trans-shipment centre for imported crude oil, fuel oil and diesel.

The government has not provided an estimate of damage or said how much it has lost overall in key fuel supplies. The first tank was at 50 per cent capacity and contained nearly 883,000 cubic feet (25,000 cubic metres) of fuel. The second tank was full.