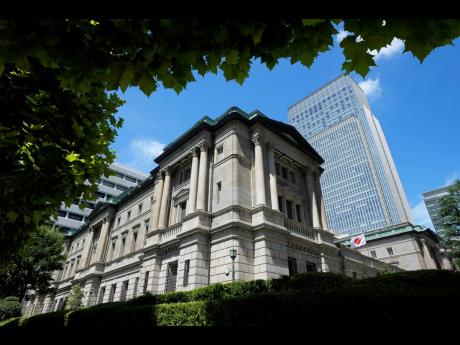 AP
A Japanese flag flutters at the Bank of Japan headquarters in Tokyo on July 29, 2022.

Japan’s economy grew at an annual rate of 2.2 per cent in the April-June quarter, the government said Monday, as consumer spending rebounded with the gradual lifting of pandemic precautions.

After keeping its borders closed to most travellers throughout the pandemic, Japan has slowly begun reopening to tourism, as meanwhile business has returned more or less to normal after various voluntary restrictions were eased.

That means families are venturing out and spending more, even as coronavirus infection rates have soared with the spread of the omicron variant of COVID-19.

A revised estimate put growth for the world’s third-largest economy as flat in the first quarter of the year, upgraded from an earlier reading of a 0.5 per cent contraction. The reading for the last quarter was below forecasts for 2.5 per cent annual growth. In quarterly terms, the economy expanded 0.5 per cent, surpassing its pre-pandemic size but slightly weaker than analysts had expected.

“Nevertheless, it suggests that pent-up demand from COVID-19 reopening could continue to underpin growth ahead,” Jun Rong Yeap of IG said in a commentary.

Private consumption jumped at an annual rate of 4.6 per cent but appeared to be constrained by surging prices.

After decades of fighting deflation, or weakening prices and wages, soaring global costs for energy and other commodities are hitting Japanese pocketbooks and balance sheets. Japan imports nearly all of its oil, gas and coal as well as food and industrial components used in manufacturing.

The inflation rate remains relatively low. The Bank of Japan’s most recent estimate for the fiscal year through March 2023 is for 2.3 per cent consumer inflation, way below the recent four-decade high levels of eight per cent to 9 per cent in the United Sates that now show signs of easing.

But the Japanese yen also has weakened, to two-decade lows against the dollar, making imports relatively more expensive. On Monday, the dollar was trading at about ¥133. It recently surged to nearly ¥140.

Experts attribute the dramatic surge in COVID-19 cases in recent weeks to record highs to a greater availability of tests, more transmissible variants and many Japanese being under-vaccinated even if shots are readily available.

It has added to uncertainty over the outlook. Some analysts think Japan’s economic growth will drop again in the July-September period.

“After a much brighter spring, we think the economy will slow again this quarter on the back of weaker consumer spending due to rising COVID-19 infections,” said Takayuki Toji, an economist at SuMi TRUST, said in a report.

Much depends on what happens elsewhere, especially in China, a huge source of demand for Japanese exports. Efforts by Chinese authorities to stamp out COVID-19 by shutting down businesses, neighbourhoods and sometimes whole cities, have dented growth and caused disruptions to manufacturing throughout the region.

“Exports should be supported by the lifting of the urban blockade in China and capital investment should remain firm but slowing global growth due to monetary tightening in the US and Europe will take its toll,” Toji said.