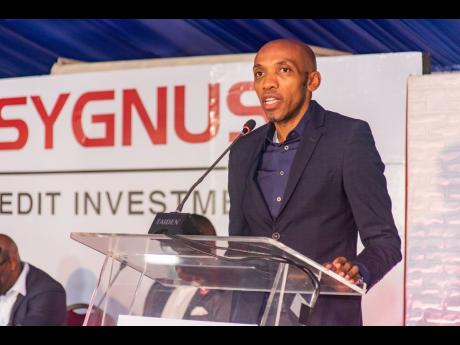 Sygnus Credit Investment Limited, SCI, a subsidiary of the fast-evolving investment group Sygnus Capital, wrote off a near-US$4-million unsecured loan to an insolvent Cayman hotel company controlled by the former Jamaican politician and businessman Hugh Hart, contributing to the slashing of SCI’s profit for the year that ended in June, by 24 per cent, company officials said.

Sygnus Credit is one of two listed companies in the privately held Sygnus Capital group. The other is Sygnus Real Estate Investment.

The SCI loan to Hart’s company, MV Cayman, was extended in June 2019. It ultimately became victim to MV Cayman’s financial troubles, which were exacerbated by the COVID-19 pandemic that badly hurt the territory’s tourism industry, and the decision of a Cayman Island businessman, Jerry Beck, to recoup a US$2-million investment after a court agreed that MV had failed to abide by its obligations under the deal. The hotel has remained closed since it was shuttered during the pandemic. By then, court documents show, it was already nearly out of money, with under US$10,000 in its bank account. It also had unpaid utility bills.

In 2016 Beck, who also has investments in technology, bought nine units in the old Treasury Island Resort that MV Cayman had redeveloped on Grand Cayman’s West Bay and operated under Jimmy Buffet’s Margaritaville franchise. But to protect his investment, Beck wrote into the agreement a buy-back clause, under which he would be repaid US$2 million if MV lost the Margaritaville franchise and failed to replace it with one of “equivalent calibre”.

MV Cayman lost the franchise in the summer of 2020, as the COVID-19 pandemic was kicking into high gear. The resort was renamed Palmar. However, Beck sought to enforce the buy-back agreement, eventually going to court to demand MV Cayman’s “specific performance” under the contract. Among MV Cayman’s counter-arguments was that it had already obtained an equivalent hotel brand, but nonetheless Beck hadn’t afforded it reasonable time to do so, especially in the context of the pandemic.

Last December, Justice Margaret Ramsay-Hale of the Cayman Islands Grand Court ruled in Beck’s favour and in January, approved Beck’s request for the appointment of a receiver to protect the interest of creditors, of which the Cayman businessman is the largest. MV Cayman has filed appeals against these actions.

However, further court hearings have been delayed and in the face of the decision of the receivers to sell the hotel, Sygnus Capital’s Chief Investment Officer Jason Morris told last Wednesday’s quarterly investors’ briefing, the Jamaican company decided on the charge-off of the loan.

“Based on the fact that the court date was moved from August to September, and there being no concrete information about the progress of the capital raises on the part of the sponsors, we decided to take the full charge-off on the assets,” Morris said.

He noted that Sygnus could write-back the asset should the MV Cayman’s owners or the receivers raise enough money to settle. The Cayman Island write-off was SCI’s first and amounted to an annualised loss rate of less than 0.4 per cent on more than US$220 million of investment capital deployed over the last five years.

Morris said that last year’s profit was on the back of net investment income of US$5.27 million, an increase of 40 per cent on the previous year’s US$3.76 million.

In the meantime, Morris reported that SCI, in February, completed its acquisition of 93.7 per cent of the Puerto Rican alternative investment company, Acrecent Financial Corporation, using a vehicle called Sygnus Credit Investments Puerto Rico. SCI paid US$21.22 million for the acquisition, which it now carries on its books for US$24.16 million.

Morris said SCI will unveil recasted targets along with new products and strategies at its annual general meeting, which is expected in November. Until then, he said, SCI will continue to execute on its existing US$20-million pipeline of projects, while strategising for a bigger US$100-million portfolio with its new subsidiary in the larger Puerto Rican market.