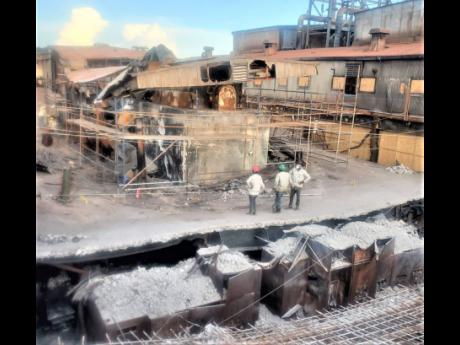 This November 1, 2021 photo shows the old 13.8 KV room in the Jamalco powerhouse and the fire-damaged electrical cabinets with Turbine 1 being demolished, after the facility was damaged by fire on August 22, 2021.

Insurance payments amounting to US$86 million, or nearly $13 billion, have so far been collected by Noble Group, the Hong Kong-based majority owner of Jamalco alumina plant in Clarendon, which was extensively damaged and shuttered by fire in August...

Insurance payments amounting to US$86 million, or nearly $13 billion, have so far been collected by Noble Group, the Hong Kong-based majority owner of Jamalco alumina plant in Clarendon, which was extensively damaged and shuttered by fire in August last year.

More tranches of the insurance money could follow as the plant rebuilds to produce alumina for export.

“Reconstruction of Jamalco is under way. To date, the reconstruction has been funded by Jamalco’s insurance policy,” Noble said in its financial report to investors on August 25.

Noble’s financials split the insurance claim of $86 million over the first and second quarters of the half-year.

The full amount of the insurance payments due from the Jamalco fire is not known, but Noble stated in its 2021 full-year financials and in a 2021 release that “Jamalco has property and plant insurance coverage of up to US$250 million to address single incidents such as this fire”.

The company said that the closure cost US$500,000 a day. Last year, Noble said the money required to get the Jamalco plant back to half its operating capacity was at US$19 million, or about $3 billion.

Noble Global Holdings Limited owns 55 per cent of Jamalco through General Alumina Jamaica Limited, with the remaining 45 per cent held by the Government of Jamaica, GOJ, through Clarendon Alumina Partners (CAP).

On August 22, 2021, the Jamalco refinery, based at Halse Hall in Clarendon, was ravaged by fire. This resulted in the plant shutting down production and negatively affecting the overall sector performance. For instance, in the January to March 2022 quarter, the mining sector declined by 60.6 per cent, compared to a year earlier, according to quarterly data from the Planning Institute of Jamaica, which tracks economic performance.

The refinery was expected to return to pre-fire production levels this year, but up to June, Noble said the plant had restarted operations at 50 per cent capacity. It is expected to reach full capacity later this month, although a major reconstruction of the facility is expected to continue for two more years.

The shutdown resulted in the Noble Group booking virtually no revenue over the six months. Consequently, it booked a US$59-million operating loss at half-year, as it still had to service its fixed costs during the period.

The insurance award was booked in the financials as ‘other income’. This propped up the balance sheet and tilted it towards making US$28 million in adjusted earnings before interest, tax depreciation and amortisation, or EBITDA, compared to US$10 million a year earlier. At half-year, the company still inked a net loss of US$36 million, compared to a loss of US$17 million a year earlier. Its first-quarter net profit of US$130 million sank to a US$167-million loss in the second quarter.

“Operating loss from supply chains of US$59 million, due to fire event at Jamalco plant in August 2021 which halted alumina production, resulted in minimal revenue, whilst fixed costs continued to incur. Nevertheless, this is offset by insurance compensation booked in other income line,” the Noble Group financials noted.

The government expects the value of mining exports from bauxite and alumina to rise to US$507 million ($77 billion), or 7.0 per cent higher than last year, aided by the reopening of the Jamalco plant, according to a March 2022 GOJ filing with the US Securities Exchange Commission.

There are three main refinery plants in operation – Jamalco, which is owned by Noble and government; Windalco, owned by Russian company UC Rusal; and JISCO Alpart, owned by Jiuquan Iron and Steel Company of China.

Jamalco and Alpart have been effectively closed for extended periods, and there are concerns about Windalco’s Russian ownership in the context of the widening sanctions that have resulted from Russia’s invasion of Ukraine since February.