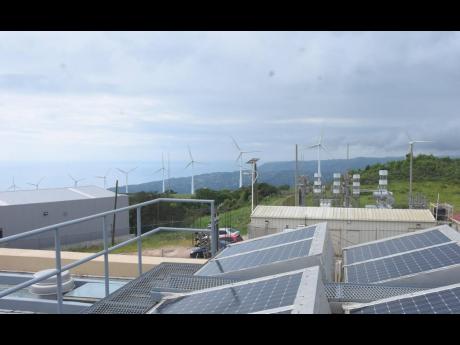 Wind turbines are seen in the background from the Wigton Windfarm complex in Manchester.

Armed with government approval for the grant of a 20-year generation licence, commencing April 2023, and the looming end of life for nearly a third of its power-generation equipment and capacity, the management of energy company Wigton Windfarm Limited is hopeful that talks for financing the production capacity replacement will be wrapped up before the clock runs out on the ageing equipment.

Wigton’s Managing Director Earl Barrett told the Financial Gleaner this week that the company is weighing its options and that work is on in earnest to prepare for the inevitable retirement of the 23 wind turbines, each capable of producing up to 900 kilowatt, kW, of power. Barrett said the aim is to go bigger and better with the replacement, although he did not disclose the new production capacity that the company was aiming to bring on stream, neither were cost projections given for the new power-generation infrastructure.

“The intent is to replace the obsolete equipment with larger capacity and more efficient units,” Barrett in an interview.

Wigton’s first phase, which represents 20.7 megawatts, MW, of the company’s 62.7 MW total generating capacity, was commissioned in 2004 and was licensed for 20 years, expiring in 2024. Industry standards indicate a useful life of about 25 years for wind turbines. This puts obsolescence of the phase one equipment less than seven years away.

The Cabinet approval of the grant of a new a licence allows the phase one generation to continue after 2024.

Wigton already has more efficient turbines in phases one and two. These larger turbines are capable of producing 2,000 kW each.

In a release to the Jamaica Stock Exchange, Wigton said it must now engage in negotiations “with other key stakeholders, to include its suppliers, financiers, its sole customer and the regulator, in order to determine the final cost of equipment, overall project financial viability, applicable tariff, agreed terms and conditions of sale of the capacity generated and, ultimately, a decision as to whether to commission a renewed Wigton Phase I.”

Barrett says the outcome of the negotiations with stakeholders is key to what Wigton will ultimately do.

“The negotiations will be done and concluded in sufficient time and in line with the expiration date of the existing Wigton Phase I power-purchase agreement in 2024,” Barrett said.

“The overarching position is nevertheless that the management and board of directors of Wigton will always ensure that the value to shareholders is maintained, while aggressively seeking to grow the business,” Barrett added.

Wigton has had to contend recently with shrinking revenues and reduced profits. After holding steady at $2.4 billion to $2.6 billion between 2018 and 2021, sales fell to just over $2 billion for the end of year to March 2022. This was due to a combination of a lower tariff on power produced from Wigton II and lower power production. Meanwhile, cost of sales, which includes maintenance expenditure, has been climbing steadily from about $700 million in 2018 to $819 million at March this year. At the same time, plant availability, where turbines are ready to work when there is enough wind, moved down from the internationally acceptable 94 per cent to about 87 per cent, on account of maintenance delays and lower reliability.