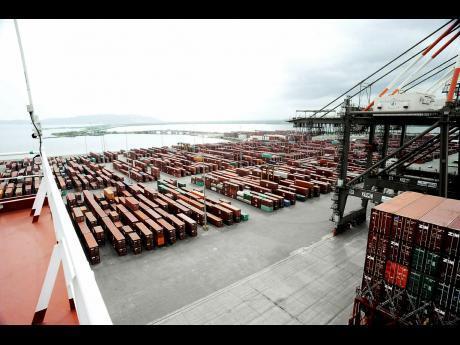 Much of the backlog is being blamed on supply chain disruptions from the COVID-19 pandemic. - File photo

President of the Jamaica Chamber of Commerce (JCC) Ian Neita has sounded alarm over the backlog of cargo ships at the island's port, warning that if importers do not take action to clear goods immediately, it could mean trouble for the busy Christmas season ahead.

Neita, in a press release circulated earlier Thursday, said that members of the JCC's import community are experiencing delays in the arrival and clearing of raw materials and finished goods, an event which has forced some vessels to sail to other ports to unload Jamaica-bound cargo, in hopes that feeder ships will move the cargo back to Jamaica.

In other instances, cargo is held offshore for lengthy periods before it can be landed.

The clearance times, which in some instances have moved from approximately six days to 12 days or beyond, is now a headache for the import community and is seen as a threat to revenue stability as the country heads into the busy Christmas season.

“We met with the port operators last week and they indicated that the ports of Jamaica are totally jammed. They say there are over two thousand containers on the ports that are waiting to be taken off and that is a big problem,” President of the Jamaica Manufacturers and Exporters Association (JMEA), John Mahfood told the Financial Gleaner.

Much of the backlog is being blamed on supply chain disruptions from the COVID-19 pandemic.

Constant changes in the shipping schedules have pushed distributors and retailers into holding higher levels of inventory as a buffer against future disruption. But, with limited storage space or financing issues, some importers are not moving the goods in time, which exacerbates the logistics situation.

The delays are further lengthened from ships having to offload some 5,000 containers to locate cargo destined for Jamaica.

“Each ship has to be dealt with individually and that means it will take a longer time to get the containers landed and others back on the ship,” the JMEA President said. “The other issue is that importers are booking stops to either drop off or pick up containers, but they are not honouring those bookings.”

“The situation is pretty bad and it's resulting in shortages. For example, there are very little plastic bottles being landed in Jamaica, which are used in the production of Wata and juices,” Mahfood continued.

Work is currently underway by the port operators to stack cargo in a manner that segregates domestic and transhipment cargoes at the point of loading. But that new system is not expected to be in place for some two to three months.  The issue of storage space at Kingston Container Terminal is also being examined.

“I presume they are talking with the Government about identifying additional space because right now they have reached their capacity,” Mahfood said.

In the meantime, both the JMEA and JCC say they have been trying to contact the importers to get them to move faster in clearing their goods.

“It's obviously a bad situation and it's going to take a number of months,” he said.