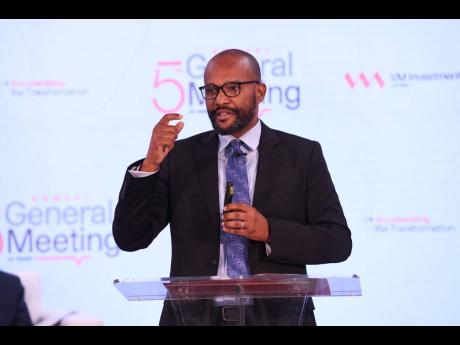 Victoria Mutual Investments Limited, VMIL, has purchased a commercial property for US$18 million ($2.7 billion), marking the first acquisition for its real estate portfolio, with other deals to follow. “It is a business process outsourcing...

Victoria Mutual Investments Limited, VMIL, has purchased a commercial property for US$18 million ($2.7 billion), marking the first acquisition for its real estate portfolio, with other deals to follow.

“It is a business process outsourcing property in Montego Bay,” said VMIL CEO Rezworth Burchenson in an interview, following the company’s investor briefing on Wednesday.

“The US$18-million real estate transaction is an opportunity for the property fund and it will provide a high yield,” he said, adding that the company would provide more specifics at a later date regarding its real estate strategy.

VMIL is the latest financial company to take aim at real estate assets or deepen their investments in the market since the pandemic. The sector is generally considered a safer bet for investors in periods of crisis.

VMIL’s real estate assets will form the basis of unit trust fund for clients to buy and track their returns over specific periods.

The company plans to focus on commercial real estate to grow its portfolio, arguing that deals are emerging, but Burchenson declined to comment on them until they are finalised.

Real estate forms part of its renewed push for less risky revenue during periods of uncertainty. Burchenson said that the real estate portfolio will allow VM Investments to grow its rental income without materially increasing the risk to its balance sheet.

The purchase “shifted” one asset class to the next, Burchenson said.

VM Investments acquired the Montego Bay property within the June quarter, but the name of the previous owner was not disclosed.

“The BPO deal was structured such that the subscribers were clients within the unit trust and VMIL, which holds roughly 10 per cent of the value,” said Burchenson, explaining the ownership structure of the property.

The property is projected to generate returns of around 12 per cent to 15 per cent, including rental and capital appreciation, he added.

VM Investments wants to grow its revenues without putting its capital at risk. Assets such as bonds and stocks change in value based on market conditions, and a downturn can negatively impact on capital.

In June, VMIL’s capital dipped to $3.2 billion from $4.2 billion a year earlier, due to a markdown of the company’s investment revaluation reserve, amid a fall in the prices of bonds and equities.

VMIL took the decision to bolster capital by suspending regular dividend payments during this period of uncertainty, said President & CEO of VM Group Courtney Campbell on the investor call.

“All these factors have impacted on the investment instruments we hold. If bond prices fall, it will impact on capital, and we want to make sure we have a strong buffer,” said Campbell. “It is prudent to suspend dividends for now,” he said.

Since last December, the value of VMIL’s investment portfolio has fallen by nearly $2 billion to $18.8 billion.

The company last paid a dividend of 15.5 cents per share in October 2021, amounting to over $232 million. Eighty per cent of those funds flowed to majority owner Victoria Mutual Building Society.

At the release of its second-quarter results at the end of July, VMIL was concerned that the fears of a potential US recession, amid rising inflation and interest rate hikes, might cause the Jamaican economy to experience “negative spill offs through reduced remittance inflows and less capital investments”.

Consequently, the company began reducing focus on revenue generated from assets with fluctuating interest rates, and prioritising income generated from set fees, such as unit trusts and commercial rentals, instead.

“This is not the year to pursue balance sheet growth because it can hurt our capital,” said Burchenson.

Over six months, profit at VM Investments dipped slightly to $251 million, when compared with year-earlier levels at $265 million. The bulk of the profit was generated in the second quarter, as the first quarter was impacted by the global market turmoil.

During the half-year, the company brokered various deal, including the Dolla Financial Limited IPO, and Kingston Properties Limited’s additional public offer of shares. Also, VM Investments partnered with London-based Actus Partners to form a private equity fund that aims to raise up to US$100 million for investment in Caribbean companies. VM Investments has invested US$10 million in the fund so far, Burchenson said.