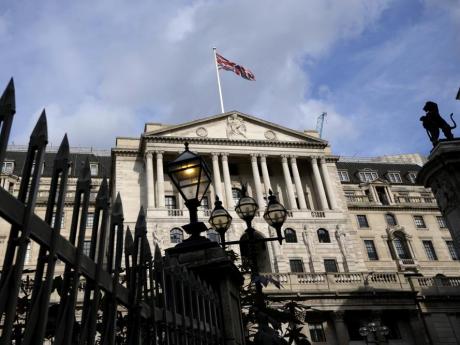 A view of The Bank of England in London, Thursday, September 22, 2022. Britain's central bank is under pressure to make another big interest rate hike Thursday. Inflation in the United Kingdom is outpacing other major economies, but the US Federal Reserve and other banks are moving faster to get prices under control. (AP Photo/Kirsty Wigglesworth)

LONDON (AP) — The Bank of England raised its key interest rate Thursday by another half-percentage point to the highest level in 14 years, but despite facing inflation that outpaces other major economies, it avoided more aggressive hikes made by the United States Federal Reserve and other central banks.

It is the Bank of England's seventh straight move to increase borrowing costs as rising food and energy prices fuel a cost-of-living crisis that is considered the worst in a generation.

Despite facing a slumping currency, tight labour market and inflation near its highest level in four decades, officials held off on acting more boldly as they predicted a second consecutive drop in economic output this quarter, an informal definition of recession.

The bank matched its half-point increase last month — the biggest in 27 years — to bring its benchmark rate to 2.25%.

The decision was delayed for a week as the United Kingdom mourned Queen Elizabeth II and comes after new Prime Minister Liz Truss' government unveiled a massive relief package aimed at helping consumers and businesses cope with skyrocketing energy bills.

The new measures have eased uncertainty over energy costs and are “likely to limit significantly further increases” in consumer prices, the bank's policymakers said. They expected inflation — now at 9.9% — to peak at 11% in October, lower than previously forecast.

“Nevertheless, energy bills will still go up and, combined with the indirect effects of higher energy costs, inflation is expected to remain above 10% over the following few months, before starting to fall back,” the monetary policy committee said.

The bank signalled it is prepared to respond more forcefully at its November meeting if needed. Its decision comes during a busy week for central bank action marked by much more aggressive moves to bring down soaring consumer prices.