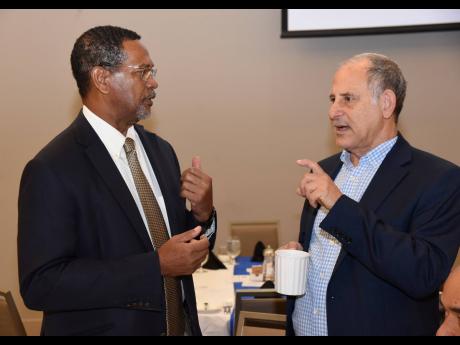 The ongoing switch to liquefied natural gas as fuel for Jamaica Public Service Company’s power plants has resulted in a two-third reduction in the demand for heavy fuel oil or HFO that the Petrojam refinery supplies to the utility.

General Manager of Petrojam Winston Watson says prior to the wide-scale use of natural gas by the electricity provider – which started switching over to natural gas six years ago – the refinery supplied it with about three million barrels of HFO.

Now the volume supplied is around one million barrels.

“We still sell some of that HFO to some of the power companies like Jamaica Energy Partners, West Kingston Power; and we also sell HFO to the ships,” Watson said at a forum hosted by the refinery on Wednesday.

With two-thirds of the business from its largest customer, JPS, out of the equation, Watson says the refinery has to find other ways to utilise the freed-up supplies. One of its solutions is to increase its production of asphalt for domestic supply and export, following adjustments made at the plant, the value of which is yet to be disclosed.

“Probably right now, Petrojam has the only asphalt plant in the Caribbean. There is a small one in Suriname, and then there’s Petrojam,” Watson.

Petrojam’s refinery has a rated capacity of 35,000 barrels.

The asphalt plant has a rated daily output of about 1,500 barrels.

The project should be viewed as one of plant optimisation rather than expansion, he added, explaining that the physical plant will not be expanded, but processing will be optimised so that the total amount produced will be greater.

“What we want to do is to expand it so that we can produce more and export in larger volumes,” Watson said, adding that demand was expected from ongoing roadworks, including highway construction activity.

The investment in the asphalt plant involved the addition of equipment and process changes.

“It primarily meant putting in heat exchangers, additional pipelines and some more storage. I don’t have numbers right now, but it was not a lot,” Watson said.

The plant is currently said to be doing 1,200 barrels of asphalt per day. That equates to around 12,000 per month based on the current cycle of production at the plant, which is 10 days per month.

“We should be able to produce about 1,500 barrels per day, but the difference now is that we will do it continuously, as opposed to doing it intermittently. Once we can consistently produce that, then we should be doing more in exports,” he added.