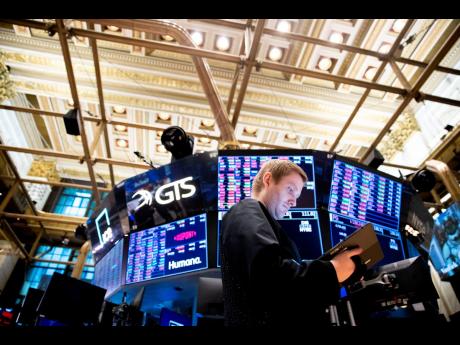 AP
Traders work on the floor of the New York Stock Exchange on September 13.

A rare bear market in bonds hasn’t gotten much attention, but it may be inflicting more pain on investors than the downturns for stocks, cryptocurrencies and other investments.

Investment-grade bonds — those issued by governments and corporations with good credit ratings — have fallen more than 20 per cent from their peak in January 2021. That may not sound like a big deal when large US stocks tumbled 20 per cent within roughly six months and bitcoin halved in value this year alone.

But bonds are supposed to be the safe part of any portfolio. Investors expect them to offer stability when stocks and other risky investments take one of their notoriously sharp swings. Now even this part of investors’ portfolios is taking on water.

“Global bonds have entered the first bear market in a generation,” UBS strategists wrote in a recent report.

This year’s returns for the widely followed Bloomberg Global Aggregate index of high-quality bonds look to be the worst since its 1990 inception. It could be one of the worst years ever for bonds, if not the worst.

Bond prices around the world have been falling as central banks rush to raise interest rates in hopes of beating back the high inflation damaging economies globally.

Sweden’s central bank this past week more than doubled its key interest rate to 1.75 per cent, for example. The European Central Bank recently raised its key rate by a record amount, three-quarters of a percentage point. In Washington, the Federal Reserve announced its third such hike of the year this past week.

When interest rates rise, they knock down prices for older bonds already sitting in investors’ portfolios. That’s because the older bonds’ yields suddenly look less attractive than what newer bonds are offering. Some bonds are protected from such price swings, such as I-bonds issued by the United States government, but access to them is limited.

The widespread expectation is that the Fed and other central banks will keep raising rates, which should maintain pressure on bonds.

Many professional investors say that despite these challenges, bonds should still be a safe part of any portfolio. That’s because other options look even more risky.

Rising rates can hurt stock prices even more than bonds if corporate profits don’t grow quickly, and analysts are now slashing their forecasts for upcoming profits. Gold’s price is also falling because of rising rates. Unlike bonds, gold doesn’t pay its investors any interest.

Plus, many investors hope the sharpest rate hikes may now be in the past. And if a recession does indeed hit, which some economists are predicting, bonds could hold up better than other investments as investors shift money into them and out of stocks. They have a reputation for safety, after all.