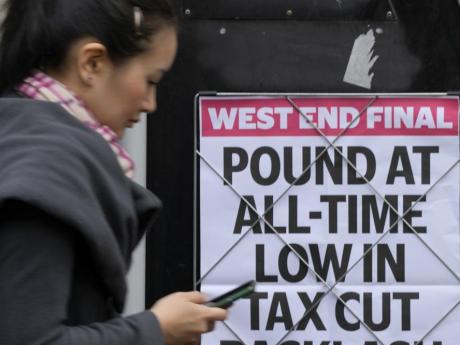 A woman walks past a headline posted on a wall in London, Tuesday, September 27, 2022. The British pound has stabilizsed in Asian trading after plunging to a record low, as the Bank of England and the British government try to soothe markets nervous about a volatile UK economy. The instability is having real-world impacts, with several British mortgage lenders withdrawing deals amid concern that interest rates may soon rise sharply. (AP Photo/Frank Augstein)

The turmoil is already having real-world effects, with several British mortgage lenders pulling offers from the market amid expectations the Bank of England will sharply boost interest rates to offset the inflationary impact of the pound's recent slide.

It was trading at around $1.08 on Tuesday, after plunging as low as $1.0373 early Monday. The British currency is still down 4% since Friday when Treasury chief Kwasi Kwarteng announced plans for 45 billion pounds ($49 billion) of unfunded tax cuts.

The pound has fallen 20% against the dollar this year.

Kwarteng's announcement, which comes at the same time the government plans to borrow billions to help shield homes and businesses from soaring energy prices, sparked concerns that the new government's policies would swell government debt and further fuel inflation.

Late Monday, the central bank said it was “closely monitoring” financial markets and was prepared to boost interest rates “as much as needed” to curb inflation, which is already running at 9.9%, the highest among major economies.