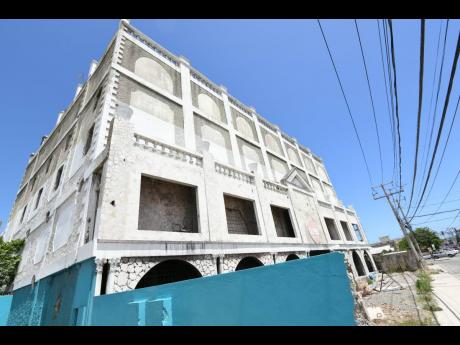 The owner of the building that once housed Globe Fine Furniture is looking among the outsourcing and manufacturing sectors for tenants. It’s not clear how long the property has been up for rental, but its positioning on 1st Class Realtor’s website...

The owner of the building that once housed Globe Fine Furniture is looking among the outsourcing and manufacturing sectors for tenants.

It’s not clear how long the property has been up for rental, but its positioning on 1st Class Realtor’s website suggests it may have been listed about one or two months ago.

The owner is seeking monthly rental of US$6,700, or about $1.03 million in local currency, for a portion of the building. Only one of the building’s four floors, incorporating 10,000 square feet of space, is being marketed for rent.

The listing notes that the building – a grey edifice that has stood in Kingston for decades and unoccupied for many years – is “un-finished” and “will require some attention”. The top floors are also not available, it said.

The property spans 40,000 square feet and sits on a quarter-acre lot at Constant Spring, Kingston.

The realtor for the property told the Financial Gleaner that the unfinished works could allow for the prospective tenant to negotiate with the owner on the rental price.

“Offers can be broken down in different ways now. For example, there was a commercial property that we rented, and the offer was done in such a way that the first three months would be a built-out period, at no expense to the tenant.”

“The next three months, the tenant would pay half the month’s rent, and by the sixth month, the full month’s rent would take effect,” the realtor said.

But after racking up debt, the business closed and for years has been occupied by the homeless.

Companies Office of Jamaica and Titles Office records show that Boothe and his partners gained ownership of the Constant Spring Road property in May 1995 through a mortgage with Mutual Security Bank Limited prior to its merger with National Commercial Bank.

As business grew, Island Traders secured another loan from Mutual Security Bank, but by June 2002, the debt was transferred to National Commercial Bank for a consideration of $1.93 billion.

Island Traders’ debt was acquired a year later by Jamaica Redevelopment Foundation Inc, an American firm that acquired the Finsac debt, which had been bundled and sold by the Jamaican Government in the wake of the financial sector rescue programme mounted in the 1990s. In April 2017, Jamaica Redevelopment Foundation sold its interests in Island Traders to Vaughn Bignall. The property was subsequently sold again in 2020.

“I believe that the mortgage on the property is causing some issues with the property being sold, so maybe the owner is not finding anybody to buy it using cash, and decided at that moment to rent it,” the realtor said.

CORRECTION: An earlier version of this story incorrectly identified the current owner of the building. We regret the error and apologise for any inconvenience caused.