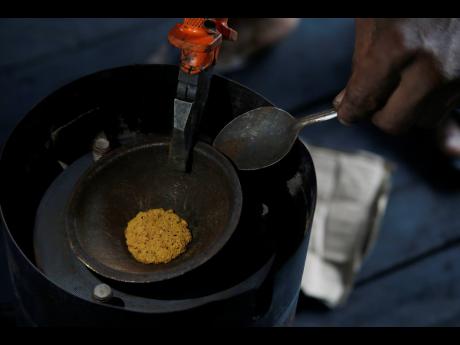 AP
A miner processes gold he illegally extracted from the Madeira River in Nova Olinda, Amazonas state, Brazil, on November 26, 2021. 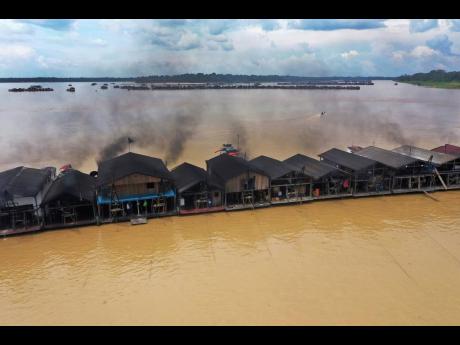 One of Brazil’s biggest gold refiners, which processes gold suspected of being mined illegally in the Amazon rainforest, has been stripped of an important industry seal of approval that global manufacturers from Apple to Tesla rely on to root out abuses in their supply chains.

An investigation by The Associated Press in January revealed how Sao Paulo-based Marsam shared ownership links and processes gold on behalf of an intermediary accused by Brazilian prosecutors of buying tarnished gold from Indigenous territories and other protected areas.

A former partner at Marsam, Dirceu Frederico Sobrinho, has been at the centre of the recent gold rush in the Amazon, purchasing through a separate company he controls more than 2 billion reais (US$388 million) worth of gold last year from wildcat miners at 252 sites. Last year, federal prosecutors filed a civil suit against the company, F.D’Gold, and two other companies that purchase gold, seeking 10 billion reais in social and environmental damages.

With that lawsuit still going on, Marsam this month was quietly removed by the Responsible Minerals Initiative from a public list of smelters and refiners deemed to follow best sourcing practices. The assessment programme, run by a Virginia-based coalition of manufacturers, emerged with the passage a decade ago of legislation in the United States requiring companies to disclose their use of conflict minerals fuelling civil war in the Democratic Republic of Congo.

André Nunes, an external consultant for Marsam, said it would appeal the initiative’s decision. He said Marsam conducted its own evaluation of F.D’Gold and found nothing amiss.

He also cautioned that the accusations of illegal mining against Marsam’s client have yet to be proven, citing a procedural decision last month by a judge who blasted prosecutors for not providing sufficient evidence to back their request that company’s activities be suspended, pending the outcome of the investigation.

“In Marsam’s understanding, we were diligent and did what was within our reach,” Nunes said. “We didn’t see a reason to end our relationship with F.D’Gold, and the judiciary corroborated that decision.”

The Responsible Minerals Initiative wouldn’t disclose its findings, citing confidentiality agreements to encourage companies to participate in its evaluation process. But according to its standards, refiners can be removed from its “conformant” list for a variety of reasons, ranging from not performing enhanced due diligence when red flags are raised – something Marsam’s internal policies also require – to overlooking evidence that actors in its supply chain falsified mandatory declaration of origin forms, a rampant problem in the Amazon’s prospecting frontier.

More than 300 publicly traded companies list Marsam as a supplier in responsible mining disclosures that they are required to file with the US Securities and Exchange Commission. Such sourcing decisions are guided by independent auditors, who evaluate refiners to make sure they aren’t contributing to illegal armed groups, human-rights violations and financial wrongdoing. Currently, 98 refiners are considered to be aligned with the initiative’s standards – the same status Marsam enjoyed from 2017 until its recent delisting.

Additionally, Marsam provided the gold that was used to make the medals hanging on the necks of athletes in the 2016 Olympic Games in Rio de Janeiro – medals touted as a victory for the environment because they were partly made from recycled materials and free of mercury.

But critics said much of Marsam’s bona fides were undeserved. They accuse the company of “greenwashing” – promoting itself as more sustainable than it really is – by not delving deep into the origin of the ore it processes on behalf of F.D’Gold. Marsam is now co-run by the daughter of Dirceu, as he is widely known in Brazil.

“In Brazil, as in so many gold-producing countries, illegality enters into the supply chain very early on, so it’s essential to get better visibility on what happens upstream,” said David Soud, head of research at I.R. Consilium, who has researched illegal gold flows in South America. “Refiners are often culpable for failures in due diligence and need to be held to strict standards, so that questionably sourced gold doesn’t get laundered into the legitimate supply chain.”

Illegal airstrips, toxic mercury ponds and forest-wrecking heavy machinery have proliferated throughout the Amazon as prospecting for gold on Indigenous lands and other protected areas has exploded in recent years. Weak government oversight enabled by President Jair Bolsonaro, the proud son of a prospector whose administration has facilitated mining in the Amazon, has exacerbated the frenzy.

But critics said companies in the US and Europe bear part of the responsibility for the devastation. So do guidelines set by the Paris-based Organisation for Economic Co-operation and Development, OECD, that are used by the Responsible Minerals Initiative and other groups to evaluate companies’ compliance, the critics said.

Such standards pay scant attention to environmental crimes or the rights of Indigenous communities. Instead, they are geared towards risks stemming from civil wars and criminal networks. In Latin America, only Mexico, Colombia, and Venezuela – where drug cartels or guerrilla insurgencies are active – are classified as conflict or high-risk areas deserving greater scrutiny for sourcing practices.

A recent study by Kumi, a London-based consulting firm that advises the OECD, found that only seven per cent of 284 end-user companies registered with the Responsible Minerals Initiative had policies on sourcing conflict materials that were in line with OECD guidelines. Most of them are US-based. The number was basically unchanged from a previous assessment by Kumi in 2017.

AP asked Amazon, Apple, Microsoft and Tesla if they intended to stop sourcing from Marsam in light of the company’s delisting. Of the four, only Apple commented, saying that Marsam is no longer part of its supply chain.

“Our responsible sourcing standards are the strongest in the industry and strictly prohibit the use of illegally mined minerals,” Apple said in a statement. “If a smelter or refiner is unable or unwilling to meet our strict standards, we remove them from our supply chain, and since 2009, we have directed the removal of over 150 smelters and refiners.”

Last month, Sao Paulo police temporarily arrested him for an outstanding warrant in the Amazonian state of Rondonia in connection with a separate investigation into illegal mining. He said his company purchases gold legally from a co-operative in the state that was being probed. He called his arrest “arbitrary”.

The son of a vegetable grocer who was raised selling produce at an open-pit mine, Dirceu acknowledges Brazil’s legal framework for gold trading has many holes. But he said toughening oversight and encouraging compliance is a better course than driving reform-minded companies like F.D’Gold out of business, when so many illegal players already export raw gold with almost no concern for the environment.

“We have laws in Brazil, and we’re complying with them. They aren’t perfect, but they can be improved,” he said, noting that the nation’s gold association, which he presided over until recently, has proposed multiple reforms. “If the market doesn’t purchase gold legally, it doesn’t go back into the earth. It will be negotiated in another way, any other way.”