Economy grew by 4.3 per cent in July to September quarter - PIOJ 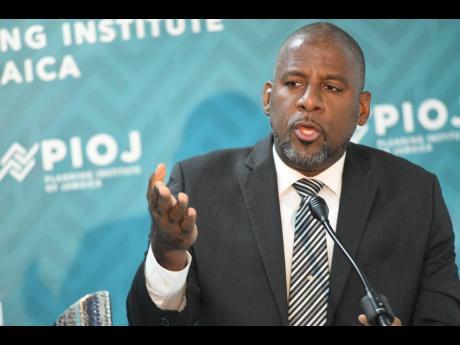 Henry: "The pace of the recovery will be influenced by the challenges within the global economy, stemming from the supply-chain shocks, its impact on inflation, and the contractionary measures being implemented by central banks to temper the rate of inflation." - File photo.

The Jamaican economy grew 4.3 per cent in the July to September quarter of 2022, according to the Planning Institute of Jamaica (PIOJ).

The PIOJ says the growth comprised of upward movement of 4.7 per cent in the services industry and a 3.2 per cent growth from the goods-producing industry relative to the September 2021 period.

It also reflects increased business hours related to the removal of COVID-19 containment measures and curfews.

The growth recorded in the quarter doubles the estimate projected by the PIOJ back in July when it forecasted between 2.0 to 3.0 per cent for the September quarter.

The conservatism will continue into the projections for the remainder of the fiscal year due to global uncertainties.

“The pace of the recovery will be influenced by the challenges within the global economy, stemming from the supply-chain shocks, its impact on inflation, and the contractionary measures being implemented by central banks to temper the rate of inflation,” he said.

The PIOJ projects growth between October to December to be 2.5 to 3.5 per cent.

These uncertainties have led global entities such as the International Monetary Fund to reduce its global growth projection for 2022 to 3.2 per cent from 3.6 per cent in April.

In relation to the macro-economy, Henry said that Jamaica's recovery continues within an environment of higher interest rates aimed at curbing high levels of inflation.

During the medium term, the PIOJ expects inflation to “gradually recede”.

The latest inflation stands at 9.9 per cent to October over 12 months, according to Bank of Jamaica (BOJ) data.

This level reflects an uptick since the 9.3 per cent over 12 months to September.

“The expectation is that inflation will gradually recede, easing the burden on Jamaican households. In this environment, it is important that monetary policy focuses on measures aimed at guiding inflation towards the target range, while fiscal policy focuses on strengthening public finances, supporting growth-inducing initiatives and reforms, while protecting the most vulnerable population from the inflation shock,” Henry stated in his address.

Henry still sees growth going forward, especially in tourism, which grew 29.6 per cent in the review period, amid external challenges.

“The numbers we have are supported by what we see so far,” said Henry.

“We underscore that these are fluid projections but for now, we are projecting growth in tourism.”

Tourism arrivals are up 52 per cent in October 2022 relative to a year earlier, reflecting buoyancy in the industry, PIOJ data indicated.