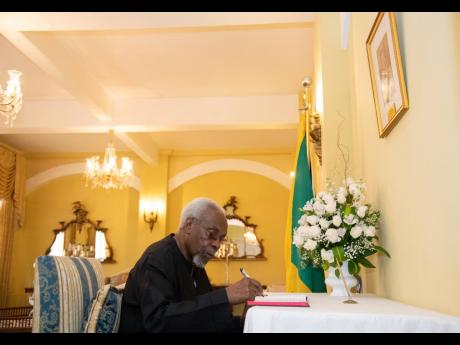 Former Prime Minister P.J. Patterson has called on the leaders of African and Caribbean nations to fashion and ink a free trade agreement that would economically link the countries of the continent with those of the Caribbean subregion.

Specifically, Patterson, who for many years had lead responsibility for trade issues for the 15-member Caribbean Community, Caricom, wants the regional trade bloc to take the lead in forging greater economic and financial ties with the ancestral motherland of the majority of the population of member countries of the integration movement, through a possible deal with the African Continental Free Trade Area, AfCFTA, which is being forged by African leaders.

In his capacity as statesman-in-residence and head of the P.J. Patterson Institute for Africa-Caribbean Advocacy at The University of the West Indies, Patterson made the call while delivering the keynote address at the opening of the annual Caribbean Multinational Business Conference hosted by New York-based publishing house Carib News last Friday.

The eventual evolution of AfCFTA into a common market was mooted at the extraordinary meeting of the African Union, AU, council of ministers in Gabon last month. Some 54 of 55 AU member states have signed on to AfCFTA.

“This opens the door for African and Caribbean countries to strengthen their bilateral trade and economic relations through a high quality and ambitious trade agreement covering trade in goods, trade in services and investment between them,” Patterson suggested in promoting the Caricom-continental Africa trade pact.

He noted that the intra-Africa trade accord and a possible deal with Caricom was important and urgent within the context of Africa and the Caribbean constituting one-third of the membership of the WTO, but accounting for less than four per cent of global trade. Africa’s share of world trade is below three per cent, while Caribbean countries account for about 0.5 per cent, the former Jamaican prime minister pointed out.

“We cannot be content to remain at the periphery of the system and must resolve to enter a new frontier in all six regions of Africa,” he declared.

Patterson reasoned that the time is opportune for ramping up Africa-Caribbean trade in the context of the negative effects of the COVID-19 pandemic on the economies of the African continent and the Caribbean region.

“Some estimates indicate that Africa has lost a decade of economic growth and development as a result of reduced export earnings for commodities, falling remittances and reduced ODA (official development assistance),” he said.

“Caribbean economies have been hit by the tremendous costs of the COVID response measures, natural disasters and the adverse consequences of the Russia-Ukraine War. The level of indebtedness has increased, putting at risk the gains that were made in the last decade,” Patterson added.

The Africa-Caribbean trade arrangement he contends, should involve the progressive removal of trade barriers by national governments based on feedback from businesses, and improvements in air and sea transport, trade in tourism, entertainment, culture and other services. Such an arrangement, he argued, would lead to more equitable trade and economic growth in the developing countries of Africa and the Caribbean.

He pointed to what he described as the untapped potential of trade by internet to overcome constraints of transport and infrastructure. He is recommending too, more two-way flow of business and financial services, policy consultancy and exchanges in arts and culture. The former prime minister also wants Caribbean countries and coastal African nations to pursue greater gains from the blue economy by sustainably exploiting the resources of the ocean. He is recommending a joint study of climate connection between Africa and Caribbean weather including looking at the dangers and convertibility to positive use of the Sargassum weed.

The trade pact suggestion, Patterson explained, is within the context of the P.J. Patterson Institute building on the groundwork laid by Jamaica’s first national hero Marcus Garvey in promoting and working towards a pan-African economic alliance which mobilises the wealth and resources of the continent and its global diaspora.

“Marcus Garvey outlined the pooling of the finance of the African diaspora in the Americas, and the human resource expertise of the Caribbean with the natural resources and workforce of Africa to unshackle trade,” said Patterson.

“The critical kernel of Garveyism is that enough financial capital resides among the globally dispersed peoples of Africa. Self-finance is key to controlling our economic process.”

He added said the P.J. Patterson Institute for Africa-Caribbean Advocacy seeks to promote the development of the people of Africa, the Caribbean and the African diaspora by focusing on the mobilisation of resources in the fields of trade, investment, science, sports, culture and entertainment.