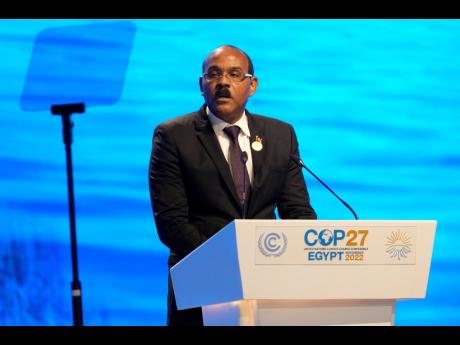 A week ago, COP27, the twenty-seventh UN conference on climate change, ended.

Seen from a Caribbean perspective, the primary objective was to deliver with other vulnerable nations an agreement on ‘loss and damage’ through the creation of a mechanism that could provide the financing required to recover from extreme weather events. It was also about ensuring a continuing global commitment to what had been agreed at COP26 in relation to reducing carbon emissions and support for adaptation.

In the end, some progress was made. Agreement was reached at the eleventh hour to establish a loss and damage fund, although who will pay, how much, and what the criteria will be for any nation to qualify are for future discussion.

It was also agreed that the multilateral development banks should undertake the reforms necessary to increase their capacity to deliver climate finance: a proposal one hopes Ilan Goldfajn, the newly elected president of the Inter-American Development Bank, and the IDB’s international governors ensure is of particular benefit to the Caribbean.

Less helpfully at COP27, oil and gas producers, including Russia and Saudi Arabia, ensured that attempts by 80 nations, including the European Union bloc and the United States, to have all fossil fuels phased out, failed. Also missing from the final agreement was any strong new language in support of limiting global warming to 1.5*C.

Acknowledging at the end of the conference that what was agreed was not perfect and that “action and ambition have lagged behind our advocacy”, Barbados Prime Minister Mia Mottley sought to emphasise that despite this “a great philosophical chasm” on the approach to issues particularly on loss and damage represented “a significant move forward”.

That may be so, but other big issues are now in play, raising potential questions about achieving future global consensus and delivery on climate change and much else.

The unsatisfactory outcome of COP 27 likely had less to do with global warming and more to do with geopolitical change, now accelerated by Russia’s invasion of Ukraine and its consequent impact on global energy prices, inflation, and food insecurity, empowering some nations and weakening others.

In Egypt, Ms Motley set the scene, capturing international attention in remarks about historic wrongs and the consequent jeopardy the Caribbean faced and still faces in relation to developed world industrialisation. However, it was Antigua’s Prime Minister, Gaston Browne, in his capacity as hair of the Association of Small Island States, who spoke about the new reality of highly polluting emerging economies, including China and India.

Stressing that he spoke without acrimony, he described both as “major polluters” needing to pay into a compensation fund that could help countries rebuild after climate-change-driven disasters. He also observed that the time has come for a global carbon tax for loss and damage on the US$3 billion a day in profits made by oil and gas producers.

What COP27 clearly demonstrated, apart from the urgent need to reform a process that has become unwieldy, is not binding, and is now being used as a vehicle for lobbying by those who represent fossil fuel and carbon -emitting interests, is the rapidly changing nature of global influence and power.

As with a recent meeting of the G20 in Indonesia, it indicated the growing strength of middle-ranking nations and their ability and interest in influencing or shaping international outcomes. These include Saudi Arabia, Turkey, Russia, India, Brazil, South Africa, Australia, Qatar, and Indonesia itself, which are all playing increasingly significant roles within their own regions and exerting leverage through fluid new international alignments.

This is happening as two superpowers, China and the US, are for a while at least, focused on being able to agree that although they are global economic competitors, they must manage this responsibly and maintain open lines of communication.

Meeting in person for over three hours in Bali on November 14, President Xi Jinping and President Joe Biden agreed to develop a framework of principles that would advance the possibility of working together. Bilateral concerns apart, they recognised the importance of addressing transnational challenges including climate change, global macroeconomic stability, debt relief, health security, and global food security “because that is what the international community expects”, Mr Biden said.

It was also apparent from a detailed briefing provided by China’s Foreign Minister, Wang Yi, and a short White House read-out, that neither side is seeking a new cold war, and in a rebuke to Russia agreed that a nuclear war should never be fought, and its use or threat of use must be rejected.

This overarching understanding had the effect at the G20 meeting that followed – according to accounts from some of those present – of enabling at Indonesia’s urging, the middle-ranking powers present to develop the language contained in the final declaration, enabling a consensus critical of the economic impact of the war in Ukraine from an alternative perspective.

By noting that the conflict is “causing immense human suffering and exacerbating existing fragilities in the global economy – constraining growth, increasing inflation, disrupting supply chains, heightening energy and food insecurity, and elevating financial stability risks”, and by including positive language about Turkish-brokered grain deals with Russia, overall agreement was possible on the multiple actions needed to spur post-pandemic economic recovery.

What is happening is that the centre of world power is departing the democracies that the Caribbean has largely for historic reasons felt comfortable with and moving towards a much wider range of actors, requiring a new approach to navigating the delivery of foreign and economic policy.

This is occurring at a time when the G7 group of leading industrial nations, the G20, and other inter-governmental bodies continue to establish rules with little reference to the specific interests of small states or other small nations excluded from such deliberations, causing the Caribbean to spend years trying to change international decisions that affect it negatively.

If, as seems likely,, the US and China establish a basis for competitive co-existence this will likely accelerate the interests of third countries in achieving relationships that are more open and better suit their ambitions. If this is so, it will offer the opportunity to build new long-term, more open extra-Caribbean alliances of the kind that some nations in the region are now pursuing independently of one another.

In my next and final regular column, I will explore what one recent commentator in the Financial Times described as “the rise of the rest” and “a less Western-skewed balance of power”, and what this may mean for the region, its future unity, and long-term economic development