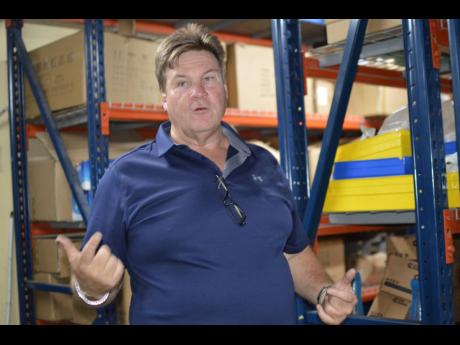 Tank-Weld Equipment, the regional dealer for Chinese auto brand Shacman, has secured deals to supply trucks and other heavy equipment to two Caribbean markets through a company called FT Farfan. The arrangement began in Trinidad...

Tank-Weld Equipment, the regional dealer for Chinese auto brand Shacman, has secured deals to supply trucks and other heavy equipment to two Caribbean markets through a company called FT Farfan.

The arrangement began in Trinidad & Tobago and branched out to Guyana.

FT Farfan is a member of the AS Bryden Group of Trinidad, a distribution business that is now majority-owned by Seprod Limited.

“Based on what they heard and with supply problems elsewhere, FT Farfan actually approached Shacman, who sent them to us as the master dealers for the English-speaking Caribbean. We met with them, and we realised that our thoughts on the industry aligned perfectly,” said Managing Director of Tank-Weld Equipment John Ralston.

He added that the meeting and subsequent partnership agreement came just before Seprod Group bought out the AS Bryden Group in May of this year.

“We agreed that we would continue even though the ownership had changed. The management was not changing, and we are comfortable with them,” Ralston said.

He added that it was FT Farfan, which part-owns equipment supply company IBIS in Guyana, that proposed an extension of the arrangement to that country, which is on its way to becoming an oil economy. Guyana, while located on the South American continent, is aligned with the Caribbean and is a member of the Caricom trading bloc.

The supply arrangement with FT Farfan began two weeks ago in Trinidad, where five trucks have already been sold and new orders are coming in, the Tank-Weld executive said.

“We sent one L3000 series mid-sized dump truck. We also sent an F3000 cement mixer, an X3000 tractor head, and two other cement mixers are on the way,” Ralston said.

Four trucks have also been delivered to Guyana, with eight more on order.

The Shacman trucks for the regional markets are first imported to Jamaica then shipped out to their final destinations. But Ralston said Tank-Weld was examining the possibility of establishing a bonded yard in Guyana, depending on how the markets develop.

Tank-Weld previously supplied Shacman trucks fitted with garbage compactors to the waste-collection agency three years ago. Of the 20 Shacman F3000 sold then, said Ralston, only two are down – both due to accidents necessitating major repairs.

The 50 new trucks are the same F3000 model, but this time, they are fitted with larger compactors based on specifications from the NSWMA. A smaller L3000 truck, about half the size of the others, is being used as a test for possible deployment into small communities with narrow streets.