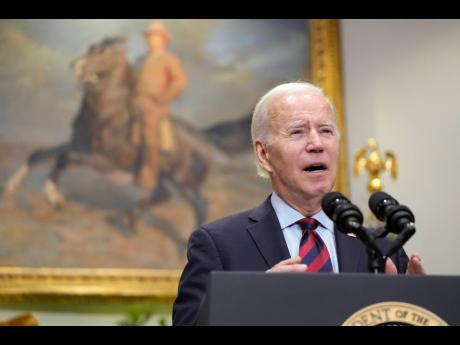 AP
President of the United States Joe Biden speaks before signing H.J.Res.100, a bill that aims to avert a freight rail strike, in the Roosevelt Room at the White House, Friday, December 2, 2022, in Washington. 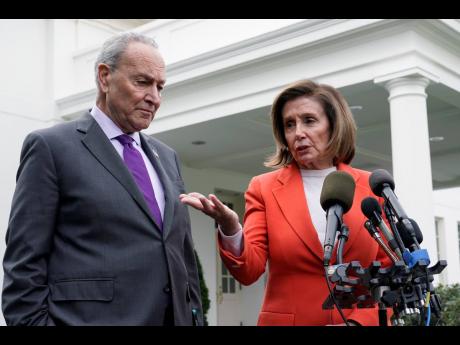 The Associated Press
FILE - Senate Majority Leader Chuck Schumer of N.Y., right, listens as House Speaker Nancy Pelosi of Calif., left, speaks to reporters at the White House in Washington, Nov. 29, 2022, about their meeting with President Joe Biden. Congress is moving swiftly to prevent a looming U.S. rail workers strike. Lawmakers are reluctantly intervening in a labor dispute to stop what would surely be a devastating blow to the nation’s economy if the transportation of fuel, food and other critical goods was disrupted (AP Photo/Susan Walsh)
1
2

United States President Joe Biden signed a bill Friday to avert a freight rail strike that he said could have plunged the United States into a catastrophic recession.

At the White House, Biden signed a measure passed Thursday by the Senate and Wednesday by the House. It binds rail companies and workers to a proposed settlement that was reached between the railroads and union leaders in September, but rejected by some of the union workers.

The president, for decades a vocal labor ally, called it the “right thing to do” given the risks to an economy that is battling high inflation.

“The bill I’m about to sign ends a difficult rail dispute and helps our nation avoid what without a doubt would have been an economic catastrophe at a very bad time in the calendar,” said Biden, adding that his team helped negotiate a “good product, but we still have more work to do in my view”.

Members in four of the 12 unions involved had rejected the proposed contract as lacking sufficient paid sick leave. Biden acknowledged the shortcoming as he said he would continue to push for that benefit for every US worker.

“I’ve supported paid sick leave for a long time,” he said. “I’m going to continue that fight until we succeed.”

Rejection of the settlement had created the risk of a strike beginning December 9, jeopardising key shipments during the holiday season. Biden and Congress staved off a work stoppage by imposing the agreement on the rail companies and workers.

A freight rail strike also would have a big potential impact on passenger rail since Amtrak and many commuter railroads rely on tracks owned by the freight railroads.

The president said that a strike would have sunk the US economy, causing roughly 765,000 job losses by rupturing supply chains. Basic goods, food and the chemicals needed to ensure clean drinking water and make gasoline could have gone undelivered.

Rising prices already have many Americans afraid of a coming downturn, but the US job market has been steady. The government reported Friday that employers added 263,000 jobs in November as the unemployment rate held at 3.7 per cent. Still, the increases in hourly wages raised concerns among many economists that high inflation could persist in ways that could force aggressive actions by the Federal Reserve to bring down prices.

Though Biden is a staunch union ally, he said the rail order was necessary to prevent a strike.

The Biden administration helped broker deals between the railroads and union leaders in September, but four of the unions rejected the deals. Eight others approved five-year deals and all 12 are getting back pay for their workers for the 24-per-cent raises that are retroactive to 2020.

But the absence of a meaningful increase in paid sick leave and other quality-of-life issues was a key concern for many union members whose votes were required for the settlement. The railroads said the unions have agreed in negotiations over the decades to forgo paid sick time in favour of higher wages and strong short-term disability benefits. Union members said railroads could afford the paid leave given their profit margins.

House Democrats narrowly adopted a measure to add seven days of paid sick leave to the tentative agreement, but that change fell eight votes shy of the 60-vote threshold needed for Senate passage.