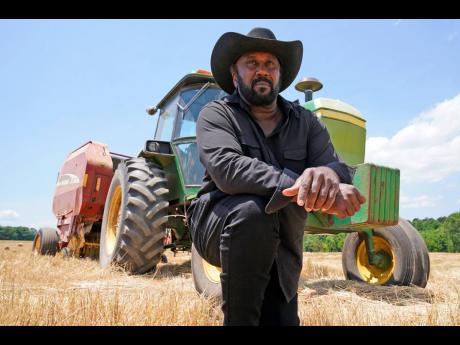 AP
Farmer John Boyd Jr poses for a portrait during a break from bailing hay at his farm in Boydton, Virginia, on May 27, 2021.

The United States federal government has illegally broken a promise to pay off the debts of a group of black farmers, according to a class-action lawsuit.

The group hopes to put pressure on officials to keep their word and to restore funding that was dropped after a group of white farmers filed legal challenges arguing their exclusion was a violation of their constitutional rights.

The lawsuit filed in October remains active even as the US Department of Agriculture moves forward with another effort to help farmers in financial distress in addition to paying farmers who the agency discriminated against.

John Boyd Jr, president of the National Black Farmers Association and one of four plaintiffs in the lawsuit, said that the new programmes don’t match the USDA’s earlier offer to pay off 120 per cent of the debt of farmers who are socially disadvantaged.

OWN UP TO IT

According to the lawsuit, this definition applies to more than 6,500 farmers who have “traditionally suffered racial or ethnic prejudice”, and are saddled with federal loan obligations. The lawsuit says this includes Native Americans or Alaska Natives; Asian Americans; black Americans or African Americans; Native Hawaiians or Pacific Islanders; and Hispanic Americans or Latino Americans.

“My dad always said, if you give somebody your word then you should own up to it,” Boyd said. “They gave us their word. We signed a contract and sent it back in and then they repealed the whole measure. I see it as a broken promise.”

The proposed payments and lawsuits follow a long history of the USDA refusing to process loans from farmers of colour, and in some cases foreclosing more quickly than usual when such farmers who obtained loans ran into problems.

The federal government settled a lawsuit in 1999 filed by black farmers and paid more than US$2.4 billion, but court filings later acknowledged there were persistent problems in the USDA farm loan programmes.

Boyd was just 18 years old when he assumed an existing USDA loan upon buying his first farm in the early 1980s. He says walking into his local USDA office was like a return to the Jim Crow era.

The lawsuit filed by Ben Crump, a Florida-based civil rights attorney known for representing family members of George Floyd and other black people killed by police, stems from congressional approval of US$5 billion in debt relief for thousands of farmers of colour. The money was included in the US$1.9 trillion COVID-19 stimulus package in 2021.

White farmers in several states then filed lawsuits arguing that the law violated their rights, which prompted judges to halt the programme in June 2021.

Faced with the likelihood of a lengthy court battle that would delay payments to farmers, Congress amended the law and offered financial help to a broader group of farmers. The new law allocated US$3.1 billion to help farmers struggling with USDA-backed loans and US$2.2 billion to pay farmers who the agency discriminated against.

In a statement, the USDA said that litigation likely would have continued for years if they hadn’t changed the law.

“Congress provided US$3.1 billion that will allow USDA to be able to work with distressed borrowers to provide help with their farm debts in new and more effective ways to help ... borrowers as much as possible stay on the land, stay in agriculture, and maintain eligibility for future assistance,” the statement said. “Additionally, for those farmers that have suffered discrimination by the USDA farm loan programmes, Congress allocated US$2.2 billion to provide additional financial assistance.”

The USDA completed a comment period on the discrimination component last month and is now drafting proposed rules for the programme.

Boyd, who grows corn, soybeans and wheat on his 1,500-acre (607-hectare) farm in Baskerville, Virginia, said the federal government sent letters to minority farmers asking them to sign up for the payments, and it should have moved faster to provide the financial help. By changing the rules after farmers sent back their signed documents, the government violated a contract, Boyd said.

“We see it as a whole lot of empty promises and broken promises,” Boyd said.

He said the guarantee of future federal debt relief caused some farmers to invest in their farms, only to be left in worse financial condition after the law changed and payments were delayed.

The lawsuit is pending in the US Court of Federal Claims, and Boyd said he hopes it will put pressure on the government to act.

Jermaine Walker, who grows corn, wheat and other crops near Pinewood, South Carolina, said the promised federal payments would enable him to save his farm from a bank foreclosure. Walker ran into trouble after he invested US$1.5 million in a chicken operation and then had a dispute with a poultry company that cancelled his contract.

Walker said he had other options to resolve the farm’s financial problem but then local bank officials assured he would be okay because of the upcoming federal debt relief payments. One year later, the original plan has been replaced and the new plan is still in the works. Walker said he’s frustrated with the government.

“I, Jermaine Walker, want them to do what they told me they were going to do,” he said about the federal government’s promise to pay his farm’s debts. “I want my neighbour, black or white, to succeed, but now ... my family farm is on the brink.”