Reinsurers want higher rates or will back out of the market 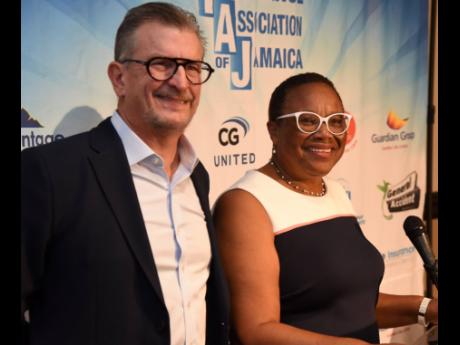 Ian Allen
Ian Allen/Photographer Senior Managing Director for Reinsurance at AON Hugh Barnabell and President of the Insurance Association of Jamaica Sharon Donaldson address the media at a press briefing on the global reinsurance market, held at Jamaica Pegasus Hotel in New Kingston on Wednesday, December 7, 2022.

Senior Managing Director of Reinsurance at AON Brokerage, Hugh Barbanell, says reinsurers are being faced with increased costs due to greater demands on their global portfolios wrought by catastrophic events such as Hurricane Ian in late September, which cut a path of destruction across a large swathe of the Caribbean and southern United States, ranging from Trinidad to South Carolina.

He also cited the hailstorm that hit France in June.

Speaking at a press briefing in New Kingston, Barbanell said all those costs arising from the damage caused by the disasters have to be transferred to the end consumer — that is, through higher premiums to policyholders of insurance companies — like any commodity, in any market.

He adds that insurance companies, too, are facing higher costs from their reinsurers.

“Twenty per cent was the number last week,” said Barbanell, referring to requests by reinsurers for increased rates.

“By the way, that number doesn’t exist anymore. We know of one firm that does business in The Bahamas that went up by 45 per cent,” he added.

Additionally, reinsurance companies in the United States market have already pushed up rates by 30 per cent, he said.

But in Jamaica’s case, insurance rates have remained low relative to other markets in the region, despite increases that consumers have been experiencing, he told reporters.

Reinsurers at one time found it easier to do business in the region and offer lower rates because there were more investors willing to back their reinsurance efforts, said Barbanell.

About 90 per cent of the premiums charged by local insurers on property is handed over or ceded to reinsurers. Those funds are put in a pool to cover the likelihood of a payout from a disaster. That reinsurance pool is either guaranteed by funds from investors who demand premium rates of return for the risk associated with covering disasters, or is covered by other reinsurers who have a larger pool of funds, with risks spread more widely.

The latter is referred to as ‘retro insurance’, according to Evon Thwaites of Iron Rock Insurance Company.

Barbanell said investors who would often back the reinsurers or the retro insurers, are reluctant to do so because the risk of catastrophes and eventual payouts is too great and may not offer a desirable return on equity.

He added that the amount of capital available to back reinsurers was a primary determinant in the reinsurers’ capacity to cover insurance risks.

“Companies would have to get more capital. For them to get the capital, they need to show good ROEs. Who is going to give the retro market the additional capital when they can put it in a bank account and make money risk-free?” Barbanell asked rhetorically, in explaining the gradual loss of reinsurance capacity.

In order for investors to return to reinsurance arena, the reinsurers themselves would have to push for greater retention of funds, and for the insurance companies to bear more of the risk.

“A year or two goes by and rates go up; rates go up, ROEs increase and investors see a valid place to invest. But right now, they don’t see the value in it,” Barbanell said.

President of the Insurance Association of Jamaica, IAJ, Sharon Donaldson, said persons in the general insurance market will be faced with increased rates in the order of 1.0 to 1.1 per cent next year.

“If the rate goes to say one per cent per $100,000 of cover, then we are talking of effectively increasing the premium to $2,000, using the same property value,” Donaldson explained, while warning that increased market values for properties also lead to higher insurance premiums.

She added that the Jamaican economy cannot function without insurance, which acts as security for loans and mortgages.

The global reinsurance market for both life and general insurance was valued at US$499 billion in 2021, according to alliedmarketresearch.com. It is projected to reach US$1.34 trillion by 2032.

Reinsurance details for the Jamaican market, however, were not disclosed. Insurance companies are very protective of the specifics of their contracts with reinsurers, Donaldson explained.

In the local insurance market, for the first six months of the calendar year, the aggregate net premium earned, or NPE — that is, the amount left over after settlement of claims and ceding of premiums to reinsurers — declined by 10 per cent to $9.6 billion, or US$61.9 million, according to industry data from insurance regulator, the Financial Services Commission.

“The fall in NPE was primarily due to an approximately 32 per cent increase in reinsurance ceded,” the regulator said in its latest industry report.