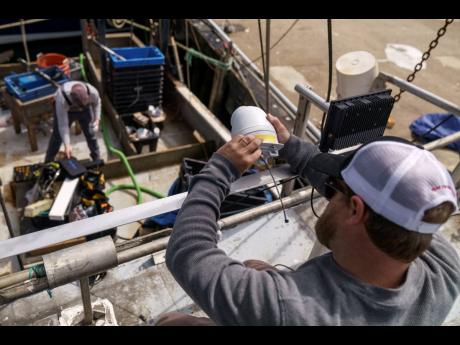 AP
AP Mark Hager, right, and Anthony Lucia, install a camera aboard the Sabrina Maria fishing vessel in Gloucester, Massachusetts on May 11, 2022. 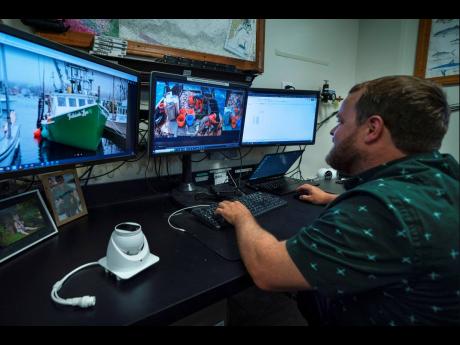 AP
Mark Hager reviews video footage made from a camera on a New England fishing boat at his office in Portland, Maine, on July 6, 2022.
1
2

For years, Mark Hager’s job as an observer aboard New England fishing boats made him a marked man, seen as a meddling cop on the ocean, counting and scrutinising every cod, haddock and flounder to enforce rules and help set crucial quotas.

On one particularly perilous voyage, he spent 12 days at sea and no crew member uttered even a single word to him.

Now Hager is working to replace such federally-mandated observers with high-definition cameras affixed to fishing boat masts. From the safety of his office, Hager uses a laptop to watch hours of footage of crew members hauling the day’s catch aboard and measuring it with long sticks marked with thick black lines. And he’s able to zoom in on every fish to verify its size and species, noting whether it is kept or flung overboard in accordance with the law.

“Once you’ve seen hundreds of thousands of pounds of these species it becomes second nature,” said Hager as he toggled from one fish to another.

Hager’s Maine-based start-up, New England Maritime Monitoring, is one of a bevy of companies seeking to help commercial vessels comply with new US mandates aimed at protecting dwindling fish stocks. It’s a brisk business as demand for sustainably caught seafood and around-the-clock monitoring has exploded from the Gulf of Alaska to the Straits of Florida.

But taking the technology overseas, where the vast majority of seafood consumed in the United States is caught, is a steep challenge. Only a few countries can match the US′ strict regulatory oversight. And China — the world’s biggest seafood supplier with an ignominious record of illegal fishing — appears unlikely to embrace the fishing equivalent of a police bodycam.

The result, scientists fear, could be that well-intended initiatives to replenish fish stocks and reduce unintentional bycatch of threatened species like sharks and sea turtles could backfire: By adding to the regulatory burdens already faced by America’s skippers, more fishing could be transferred overseas and further out of view of conservationists and consumers.

“The challenge now is getting the political will,” said Jamie Gibbon, an environmental scientist at The Pew Charitable Trusts. “We are getting close to the point where the technology is reliable enough that countries are going to have to show whether they are committed or not to transparency and responsible fisheries management.”

Since 1970, the world’s fish population has plummeted, to the point that today 35 per cent of commercial stocks are overfished. Meanwhile, an estimated 11 per cent of US seafood imports come from illegal, unreported and unregulated fishing, according to the US International Trade Commission.

To sustainably manage what’s left, scientists need reliable data on the activities of the tens of thousands of fishing vessels that ply the oceans every day. Traditional tools like captain’s logbooks and dockside inspections provide limited information. And independent observers are scarce, barely 2,000 globally.

Enter electronic monitoring. For as little as $10,000, vessels can be equipped with high-resolution cameras, sensors and other technology capable of providing a safe, reliable look at what was once a giant blind spot. Some setups allow the video to be transmitted by satellite or cellular data back to shore in real time.

“This isn’t your grandfather’s fishery,” said Captain Al Cottone, who recently had cameras installed on his 45-foot groundfish trawler, the Sabrina Maria. “If you’re going to sail, you just turn the cameras on and you go.”

Despite such advantages, video monitoring has been slow to catch on. Only about 1,500 of the world’s 400,000 industrial fishing vessels have installed such monitoring systems. About 600 of those vessels are in the US, which has been driving innovation in the field.

The stakes are especially high in the Western and Central Pacific Ocean — home to the world’s largest tuna fishery. Observer coverage of the Pacific’s longline fleet, which numbers around 100,000 boats, is around 2 per cent — well below the 20 per cent minimum threshold scientists say they need to assess a fish stock’s health.

By far the biggest obstacle to a faster rollout internationally is the lack of political will to do it. Of the 13 regional fisheries management organisations in the world, only six require on-board monitoring — observers or cameras — to enforce rules on gear usage, unintentional catches and quotas, according to a 2019 study by the Paris-based Organisation for Economic Cooperation and Development.

Among the worst offenders is China. Despite boasting the world’s largest fishing fleet, with at least 3,000 industrial-sized vessels operating internationally, and tens of thousands closer to home, China has fewer than 100 observers. Electronic monitoring consists of just a few pilot programmes.

Last year, China deployed just two scientists to monitor a few hundred vessels that spent months fishing for squid near the Galapagos Islands. At the same time, it has blocked a widely backed proposal at the South Pacific Regional Fisheries Management Organisation to boost observer requirements

“If they want to do something they definitely can,” said Yong Chen, a fisheries scientist whose lab at Stony Brook University in New York hosts regular exchanges with China. “It’s just a question of priorities.”