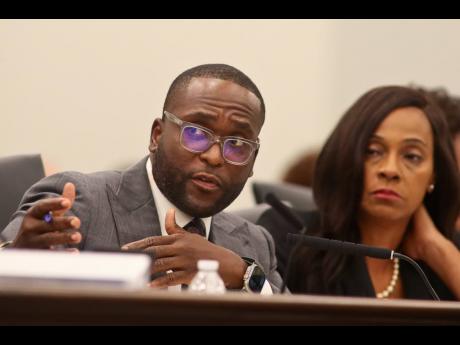 AP
Senator Shevrin Jones, D-West Park, asks a question as Senator Rosalind Osgood, D-Tamarac, looks on during the Committee on Fiscal Policy meeting on December 12 at the Capitol in Tallahassee, Florida, as lawmakers consider ways to shore up the state’s struggling home insurance market. 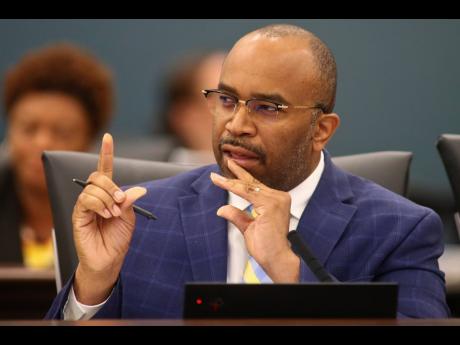 AP
AP Photos Senator Bobby Powell, D-West Palm Beach, asks a question during the Committee on Banking and Insurance meeting on December 12 at the Capitol in Tallahassee, Florida, as lawmakers consider ways to shore up the state’s struggling home insurance market.
1
2

Florida lawmakers are trying to fix in three days a home insurance problem that’s been stormy for three decades, approving legislation designed more to keep private insurers in the state than to immediately save property owners money.

A massive bill seeking a US$1-billion reinsurance fund, reduced litigation costs, and to force some customers to leave a state-created insurer passed the Florida House 84-33 on Wednesday, a day after it passed the Senate in a special session.

The bill next goes to Republican Governor Ron DeSantis for his expected signature.

“We can’t stop the weather, but we can address the cost of reinsurance, we can stop the fraud, we can tighten up the regulations, and we can address court decisions,” said Republican Rep Tom Leek, the House bill sponsor. “The first thing that we have to do is, we have to stop frivolous litigation.”

Florida has struggled to maintain stability in the state insurance market since 1992, when Hurricane Andrew flattened Homestead, wiped out some insurance carriers, and left many remaining companies fearful to write or renew policies in Florida. Risks for carriers have also been growing as climate change increases the strength of hurricanes and the intensity of rainstorms.

Earlier this year, Florida homeowners already were struggling to replace dropped policies or pay premiums, with a swelling number of them relying on the state-created insurer of last resort, Citizens Property Insurance Company.

Erik Paul, a tech industry worker in Orlando, said that over the summer his insurer notified him that the annual cost of insurance on his 1,200-square-foot (110-square-metre) house was going from US$1,700 to US$8,000. He found coverage for more than US$5,000 a year from another carrier, but he says he got a letter in October saying his rate was going up another US$111 annually, with little explanation.

While Paul thinks some provisions in the legislation considered are a good step, he isn’t optimistic it will fully resolve the issue.

“Rates keep going up year after year, regardless of whether there are hurricanes,” Paul said.

The Florida legislature had held a special session in May hoping to slow the crisis. Then Hurricane Ian smashed through southwest Florida in September, causing an estimated US$40 billion to US$70 billion in property damage.

Leek believes the changes under the legislation will bring more carriers to the Florida market, eventually sparking the competition that will lower rates. “I think that that can happen in short order, but you can’t say for certainty when it’s going to happen,” he said.

Democratic Rep Dotie Joseph proposed an amendment freezing property insurance rates for one year, saying the legislation, as it stands, does virtually nothing to provide immediate help for people facing huge rate increases.

“We have the money,” Joseph said. “I’m not saying don’t help the insurance companies. But can we do something for the people of Florida, too?”

Average annual premiums have risen to more than US$4,200 in Florida, which is triple the national average. About 12 per cent of homeowners in the state don’t have property insurance, compared to the national average of 5 per cent, according to the Insurance Information Institute, a research organisation funded by the insurance industry.

The insurance industry has seen two straight years of net underwriting losses exceeding US$1 billion in Florida. Six insurers have gone insolvent this year, while others are leaving the state.

The insurance industry says litigation is partly to blame. Loopholes in Florida law, including fee multipliers that allow attorneys to collect higher fees for property insurance cases, have made Florida an excessively litigious state, a spokesperson for the Insurance Information Institute has said.

Attorneys groups have argued that the insurance industry is at fault for refusing to pay out claims, and that policyholders sue as a last resort. The alternative, arbitration, tilts in favour of insurance companies, they say.

The bill would provide US$1 billion in taxpayer funds for a programme to provide carriers with hurricane reinsurance, which is coverage bought to help ensure they can pay out claims. It would offer “reasonable” rates in a market where companies have complained about rising costs.

The proposal will also speed up the claims process and eliminate the state’s assignment of benefits laws, in which property owners sign over their claims to contractors, who then handle proceedings with insurance companies.

The bill would force people with Citizens policies to pay for flood insurance, and require shifts to private insurers if they offer a policy up to 20 per cent more expensive than Citizens. Citizens topped one million policyholders for the first time in a decade.

Lawmakers this week were also expected to pass separate bills that would provide property tax relief to people whose homes and business were made uninhabitable by Ian, and give 50 per cent refunds to commuters who pay more than 35 highway tolls in a month with a transponder.