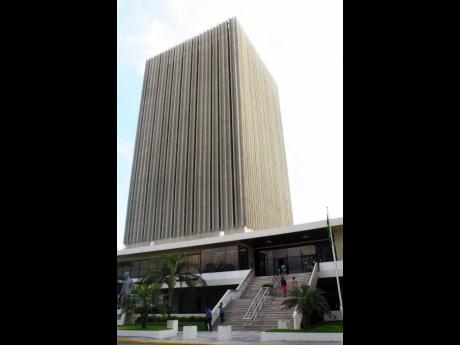 In what amounts to a nudge, the central bank is pointing out to the Jamaican Government that it can get better interest on the money it holds at commercial banks, which one official data set estimates would hit $84 billion by March. The upshot is...

In what amounts to a nudge, the central bank is pointing out to the Jamaican Government that it can get better interest on the money it holds at commercial banks, which one official data set estimates would hit $84 billion by March.

The upshot is that the Bank of Jamaica, BOJ, wants government bodies to switch to banks that will give them better returns on their deposits. But that’s not its only goal.

If a large account holder like the government were to move its deposits, the thinking is it would likely nudge banks to compete on deposit rates and increase them.

That’s what Bank of Jamaica is really after. It wants the banks to improve the interest paid out to customers on their deposits, which central bank data shows averages just 0.42 per cent on savings across the commercial banking sector and 1.59 per cent when factoring the full spectrum of deposit accounts, even after more than a year of key interest rate hikes that have pushed the rate the banks themselves are paid on their overnight balances at BOJ to 7.0 per cent.

Prior to the rate hikes, the interest on savings was 0.41 per cent, while the overall deposit average was 1.03 per cent.

The central bank authorities are serious enough that they have even discussed the matter with Finance Minister Dr Nigel Clarke.

“In addition to the initiative above, the BOJ has been in dialogue with the Minister of Finance and the Public Service about deposits of public bodies held in the commercial banking sector with a view to the GOJ earning the most competitive interest rates on those deposits,” stated the newly released minutes of the BOJ Monetary Policy Committee meeting held in December.

There are 54 public bodies with cash and equivalents projected to total $83.8 billion at March 2023, down from $86.5 billion a year earlier, according to the latest Jamaica Public Bodies report published annually by the finance ministry.

Based on BOJ data sets, customers can triple the average earning on their deposits at commercial banks by switching from saving accounts that earn on average 1.59 per cent annually to risk-averse investment accounts, which are held for specific time frames, that earn 4.86 per cent.

In theory, the Financial Gleaner calculates that the government bodies could collectively increase the interest earned from $1.3 billion to $4 billion annually, by switching, assuming they hold the funds in basic savings accounts.

Over three years, public bodies have, on the surface, shifted more funds towards investment securities, which have climbed from $136.4 billion in March 2021 to a projected $171 billion by March of this year. At the same time, their cash holdings have dipped from $98.7 billion in 2021 to the projected $83.8 billion.

The BOJ discussion on government deposits forms part of a wider concern about the sluggish upward movement of deposit rates at commercial banks. While the banks have benefited from a fourteenfold increase in what it earns on its deposits – moving from 0.5 per cent at the end of September 2021 to 7.0 per cent today – they haven’t passed it on in any substantial fashion to consumers at the retail level, the BOJ argued.

It matters to the central bank, whose remit includes safeguarding the inflation target range of 4 to 6 per cent, but which remains in breach at 9.4 per cent amid global commodity shocks.

The higher deposit rates are aimed at incentivising savings and thereby dissuading additional spending, as a means of cooling inflation.

Earlier this month, the BOJ published deposit rates offered to customers across all commercial banks. Few offered saving rates at even half that of the central bank’s policy rate. Overall, the savings rates remain relatively low, but on the lending side, the cost of loans to consumers and the government are on the rise. The BOJ, in its latest Credit Conditions Survey, noted that as a challenge for curbing inflation, the supply of credit was “still accelerating” despite the efforts of the central bank to “slow” credit growth.

Some banks have argued that they have executed fixed-rate loan contracts with some of their customers, which arguably prevents them from adjusting their business rates in line with the central bank’s policy actions, the MPC minutes indicated.

“Beyond this, commercial banks may have been sensitive to the impact of higher rates on the size of their non-performing loan portfolios. In contrast, interest rates in the non-deposit-taking-institutions sector had increased in line with the policy rate. The MPC recommended that discussions should continue with the deposit-taking-institution sector on the interest rate pass-through,” the minutes stated.

Still, while the overall average rate on deposits remained below two per cent, interest paid on investments held for specific time frames nearly doubled from 2.6 per cent at end-September 2021 to 4.86 per cent as of November 2022.

Essentially, returns on those time-series deposits improved by 87 per cent within the period, compared to 54 per cent for all deposits combined.

Jamaica has experienced fluctuating interest rates over its period of Independence. Historic data shows time-deposit rates last hitting double-digit highs of 10 per cent in August 2009, and dipping to a low of 2.38 per cent in April 2020, amid the onset of the pandemic. At the advent of the health crisis, the overall deposit rate was averaging 1.04 per cent.

The central bank classifies government deposits differently than the Finance Ministry’s public bodies report. However, both figures align in relation to local currency holdings. Specifically, the BOJ estimates the combination of deposits held by the central government, local government and other public entities at $103 billion. Of that figure, $86 billion relates to local currency deposits and $17 billion to foreign currency deposits.

There was no immediate comment from the BOJ, bankers and the finance minister.