Federal Reserve and the markets in stand-off on rate hikes 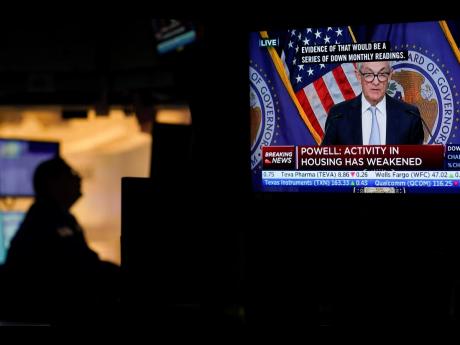 AP Seth Wenig
Traders work on the floor at the New York Stock Exchange as the Federal Reserve chairman Jerome Powell speaks after announcing a rate increase in New York on November 2, 2022.

Sooner or later, either Wall Street or the United States Federal Reserve has to blink.

Nearly a year into the Fed’s drive to quash inflation by hiking interest rates at a blistering pace, investors still don’t seem to fully believe what the Fed warns is coming next: Higher rates through the end of the year, which could sharply raise unemployment and slow growth.

Wall Street has a more sanguine view: With inflation cooling from painful highs, investors are betting that the Fed will stop hiking rates soon, pause for a bit and then start cutting rates toward the end of the year to combat what many on Wall Street expect will be a mild recession. That relatively optimistic view has helped propel the broad S&P 500 stock index up 4.4 per cent so far this year.

Yet a host of Fed speakers last week underscored a contrasting message: They expect to raise their benchmark rate above 5 per cent, modestly above Wall Street’s forecast. Doing so would likely lead to even higher borrowing rates for consumers and businesses, from mortgages to auto loans to corporate credit. What’s more, some Fed officials reiterated they plan to peg rates at a higher level through the end of this year.

The gap between the Fed’s projections and Wall Street’s expectations could have far-reaching consequences for Americans’ finances as well as for the economy.

For investors, rate cuts serve almost like hits of steroids. They make borrowing less expensive, and they typically juice prices for everything from stocks to bonds to cryptocurrencies. That’s why investors are so hungry to sniff out when the next rate cut could occur, hoping to get in ahead of it and derive the most benefit from the resulting rise in the prices of stocks and other assets.

If, on the other hand, the Fed follows through on its warnings of still-higher rates, the economy might not only tip into recession but could endure a deeper and longer one than would have occurred if it had followed the market’s path instead.

Wall Street investors have taken encouragement from the widespread assumption among economists that when it meets next week, the Fed will raise its key rate by a smaller increment, just a quarter-point. That would mark a downshift from the half-point rate increase the Fed imposed in December and four consecutive three-quarter-point hikes before that.

Fed officials have projected that their key short-term rate, now in a range of 4.25 per cent to 4.5 per cent, will eventually reach 5 per cent to 5.25 per cent. By contrast, futures markets show that a majority of investors expect the rate to peak at 4.75 per cent to 5 per cent – if not lower.

“The way the market looks at this is obviously the more you’re downshifting, the more you’re likely closer” to finishing rate hikes, said Michael Gapen, chief US economist at Bank of America.

“The more you spread out hikes, the less likely you are to get some of them,” he added, because the economy may enter a recession and discourage further hikes before the Fed can implement them.

Wall Street investors seem confident that the Fed has largely whipped inflation, which would make additional rate hikes unnecessary. By some measures, investors think inflation could drop to nearly 2 per cent – from 6.5 per cent now – by the end of this year, according to Deutsche Bank. The Fed’s policymakers, by contrast, have collectively forecast that inflation will still be 3.1 per cent by year’s end.

“The market has a very optimistic view that inflation is just going to melt away,” Christopher Waller, a member of the Fed’s Board of Governors, said last week. “We have a different view. It’s going to be a slower, harder slog to get inflation down. And therefore we have to keep rates higher for longer and not start cutting rates by the end of the year.”

Waller and other Fed officials point to the robust job market as a factor likely to keep inflation high. The unemployment rate, now 3.5 per cent, hasn’t been lower in half a century. Businesses keep raising pay to keep and attract workers, which typically fuels more consumer spending. Employers, in turn, typically pass their higher labour costs on to their customers in the form of price increases. Both trends, the Fed fears, will keep inflation far above its 2 per cent target.

Many traders also say they expect the Fed to blink once unemployment begins to steadily rise while inflation is falling. With potentially millions of people facing lay-offs, the Fed would be under pressure to begin cutting rates to try to stimulate the economy.

But this time the Fed “needs to see pain in order to bring inflation down,” Goldberg said. Fed officials are forecasting the unemployment rate could reach as high as 4.6 per cent by the end of this year, which would mean roughly 1.5 million people would lose their jobs. As a result, Goldberg said, “they’re almost unable to ease at the moment to achieve their policy goals”.

“That’s going to be a very interesting disconnect once the economy actually starts to soften,” he said. “I think you’ll have some investors who are going to be sorely disappointed.”

John Canavan, a market analyst at Oxford Economics, suggested that the yield on the 10-year Treasury note could climb higher, from its current level of about 3.5 per cent, to 3.7 per cent, if the Fed raises rates above what the market expects. Mortgage rates would rise, at least in the short-term.

In a succession of speeches last week, several Fed officials expressed optimism that inflation was easing even faster than they had expected. After peaking at 9.1 per cent in June, 12-month inflation measures have dropped for six straight months to 6.5 per cent.

Yet these officials, including Chair Jerome Powell, have stressed the need to avoid suspending their rate hikes too early for fear that inflation will reaccelerate and then require even harsher policy moves. They want to prevent the errors of the 1970s, when the Fed hiked rates, only to cut them once unemployment rose but before high inflation had been decisively crushed.

Any letup by the Fed could spark a big rally on Wall Street, with stock prices jumping and bond yields falling. That possibility, welcome as it would be for investors and businesses, is something the Fed would want to avoid: It could fuel excessive spending and potentially reignite inflation.

Lorie Logan, president of the Federal Reserve Bank of Dallas, said that if investors became too giddy about declining inflation and markets rallied, the Fed might have to raise rates even higher than it has forecast.

But the central bank’s determination to keep rates high coincides with recent evidence that the economy is slowing, renewing fears that a recession could start soon. Consumers have cut back their spending at retailers for two straight months. Factory output fell sharply in November and December. Home sales have dropped for 11 consecutive months, and last year marked their lowest level in nearly a decade.

Yet a recession could prove markets right in the end, because a downturn – particularly a deep one – could lower inflation much more quickly than the Fed expects. And while the Fed’s policymakers have said they intend to keep raising rates, they have also said they could stop hiking if the economy’s path changes.

“If we do get inflation coming down faster than I’m projecting, then I might have to adjust my current policy path,” Loretta Mester, president of the Cleveland Federal Reserve, said in an interview with the Associated Press last week.