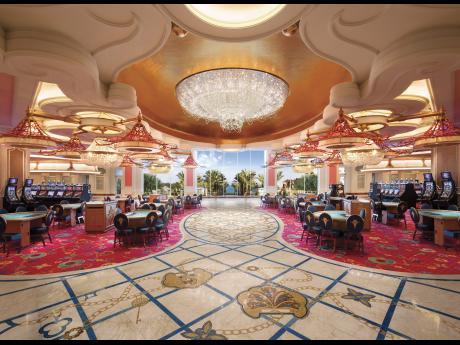 Contributed
Inside the Baha Mar casino at the incomplete mega-resort.

NASSAU, Bahamas, CMC – Government officials are set to resume negotiations aimed at the early completion and opening of the Baha Mar resort.

In a statement, Christie said: "Assuring the prompt resumption, completion and opening of the development is fundamental to protecting our national interest. The most effective way to preserve the livelihood of Baha Mar's workers, protect investors and realise the project’s great economic promise for all the Bahamas is to ensure the completion and opening of Baha Mar as soon as possible.”

He said while in China, most of the parties will be represented by persons with executive authority and it would be helpful to the negotiating process to have Sarkis Izmirlian present in person as Baha Mar’s chief decision-maker.

"Should the parties reach an agreement, the parties can get back to the completion and opening of the resort without further litigation or other delay,” the prime minister added.

“If no agreement is reached, there will still be the option of a restructuring and re-launch of the project under the authority of a provisional liquidator and the supervision of our Supreme Court, if the court is minded to so order after hearing from all sides.

“The preferred solution, however, would obviously be an amicable out-of-court settlement between all the parties.”

The Baha Mar project includes four hotels with 2,200 rooms, 284 private residences, a 100,000 square foot casino and a golf course designed by Jack Nicklaus, among other amenities.