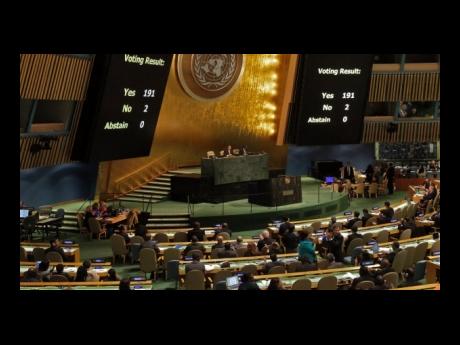 It was the first vote on the resolution since the two countries restored diplomatic ties. Israel joined the US in voting no.

But the motion won more support than it has done in the past, with 191 members of the 193-member body voting in favour.

Cuba estimates the embargo has caused the equivalent of €109 billion (One Euro=US$1.29 cents)  in damages to its economy since the embargo was imposed more than four decades.

He said while Kingstown “enthusiastically welcomed the executive decision of December 17, 2014 by United States President Barack Obama to take significant steps towards the normalisation of relations between the United States of America and the Republic of Cuba” the island notes “nevertheless, the economic, commercial and financial blockade remains intact.

“My delegation takes the floor today to reiterate that the economic, commercial and financial embargo has been and continues to be a violation of International law. It is contrary to the principles and purposes of the United Nations Charter and St Vincent and the Grenadines re-emphasises its deeply held conviction that the ongoing embargo is a flagrant and systematic violation of the rights of an entire people.”

Miguel said moreover, the embargo against Cuba is not merely a bilateral matter between Cuba and the United States, “but due to its extraterritorial nature, it violates the sovereign rights of many other states.

“Mr President, St Vincent and the Grenadines believes that this blockade is not only illegal but it is morally unsustainable,” he added.

Cuba’s Foreign Minister Bruno Rodriguez told the Assembly that the “lifting of the blockade” would “give some meaning” to the progress achieved recently, and “set the pace towards normalisation”.

In July, the United States and Cuba restored diplomatic relations after a 54-year break.

President Barack Obama has taken steps to ease trade and travel restrictions on Cuba, but only the U.S. Congress can lift the full embargo.