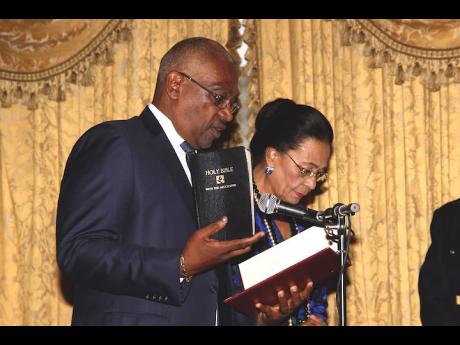 Dr Hubert Minnis (left) at his swearing-in on Thursday.

NASSAU, Bahamas (CMC):
Dr Hubert Minnis was on Thursday sworn in as the fourth Prime Minister of the Commonwealth of The Bahamas since the country gained political independence from Britain in 1973.

In his first speech as Prime Minister, he paid tribute to the electoral system saying “our democracy is the envy of many countries around the world.”

Adding that “today represents a new day for the Commonwealth of the Bahamas and one that was also steeped in ancient tradition.

“Today also represents a renewal and reaffirmation of our democratic heritage…..We will honour this mandate for change.”

The Prime Minister  noted that the general election was peaceful and free from violence and “now we are witnessing another orderly transfer of power.”

“With civility and nobility, Bahamians from all walks of life joined hands and hearts to forge a new direction for our country.

He pledged that his Government would honour that trust with an unwavering commitment to good governance, the rule of law, transparency and accountability.

“We will respect the Constitution; and we will abide by the long-standing and tested conventions of our parliamentary democracy.”

He also thanked his colleagues for reposing their confidence in him as Prime Minister. In turn, he said, he pledged an unwavering commitment to collegiality, collaboration and collective responsibility.

“Ours is an extraordinary system of government,” Prime Minister Minnis said. “I will honour the spirit and traditions of our democratic heritage.”

Minnis pledged, on behalf of his colleagues, their commitment to serve with integrity as Her Majesty’s Bahamas Government. He added that he looked forward to the “most cordial relations” with her office in the service of the nation.

“We commit ourselves to the common good of the Commonwealth of The Bahamas,” he said. “We rely on the blessings of Almighty God, who is the source of all power and grace.

The FNM was able to pull off a stunning defeat securing 34 of 39 constituencies.