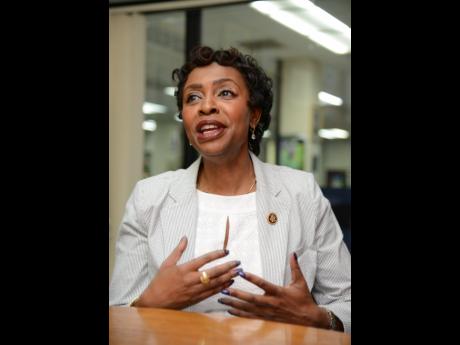 Clarke, the daughter of Jamaican immigrants, said the “Honoring Real Patriots Act of 2017” would require the US Department of Defense to change the name of any military installation or other property under its control currently named for individuals who fought against the United States during the Civil War or supported the Confederacy’s war efforts.

The legislation follows requests by Clarke and her colleagues in the Brooklyn, New York Congressional delegation that the US Department of the Army change the names of two streets at Fort Hamilton in Brooklyn that are now named for Confederate generals.

New York State Governor Andrew Cuomo, New York City Mayor Bill de Blasio, and other community leaders have since joined in calling for the name change. These requests have been refused by the Army.

“The time has come for the Army to remove from Fort Hamilton and other military installations the disgraced names of men who waged war against the United States to preserve the evil institution of slavery,” said Clarke, who represents the 9th Congressional District in Brooklyn. “Monuments to the Confederacy and its leaders have always represented white supremacy and a continuing attempt to deny the basic human rights of African Americans, told the Caribbean Media Corporation on Saturday.

“As recent events in Charlottesville, Virginia, have made perfectly clear, these monuments are nothing more than symbols of white supremacy and a pretext for the violent imposition of an evil ideology that should never have persisted into the 21st Century,” she added.

“For hundreds of thousands of Brooklyn residents, as well as troops stationed at Fort Hamilton who are prepared to fight for this nation, the monuments are an insult,” Clarke continued. “It is clear that these symbols remain an inspiration to some who espouse white supremacist ideology to perpetuate acts of terror and violence on the peaceful, law abiding citizens of our nation.”

She noted that across the United States, cities and states are removing such monuments as an “act of reconciliation and respect for people whose humanity has too often been denied.

“I strongly urge my colleagues to support this legislation and to dedicate themselves to the eradication of white supremacy, now and forever,” Clarke said. “The time for change is now.”

Last week Saturday, white nationalists and counter-protesters clashed in Charlottesville, Virginia in what has been described as one of the bloodiest fights to date over the removal of Confederate monuments across the Southern United States.

One woman was killed when a Neo Nazis man rammed a car into demonstrators against the rally, and several were injured in the mêlée.

Two Virginia State troopers were also killed when their helicopter crashed as they monitored the rally.

Clarke said she could not fathom “in the 17th year of the 21st Century to watch hatred and violence unleashed on peaceful protestors in a peaceful American city.”

She said the hatred and violence ranked “among the lowest of the lows of Donald Trump’s presidency.”

New York State Assemblywoman Diana C. Richardson, the daughter of St. Martin and Aruban immigrants, told CMC that the “unsavoury turn of events in Virginia unveiled a heightened time of racial and religious discrimination in the country,” expressing “deep dismay” over the hatred and violence.

“This sickening demonstration in Virginia displayed pure hatred, bigotry and ignorance,” said Richardson, who represents the primarily Caribbean 43rd Assembly District in the Crown Heights section of Brooklyn, adding: “And acts like this will not be permitted in the cultural melting pot of the 43rd Assembly District.”

New York City Councilman Jumaane Williams, the son of Grenadian immigrants and Deputy Leader of the City Council, wrote: “Dear Mr. Trump, at this point, in terms of ‘many sides,’ they are those who do not believe in white supremacist and Nazism, and you and ‘Making America Great Again’ supporters,“#charlottesville #resist,” said the representative for the largely Caribbean 45th Council District in Brooklyn.

“The events that occurred on August 12th, the ‘Unite the Right’ protest regarding the removal of the statue of Confederate General Robert E. Lee, were, indeed, alarming but not surprising,” Rodneyse Bichotte, who represents the 42ndAssembly District in Brooklyn, told CMC.

“The deep-rooted hate that launched this protest has long been embedded in the fabric of this country,” she added. “It has managed to rear its ugly head again. After years and years of work to remove it, we have merely covered the surface with a more palatable, thinly layered veil.

“We can no longer continue to be a country that feeds into fear mongering or oppressive behaviors,” Bichotte continued. “We must fight with and for love, morality, understanding and justice.

“This animus can only be treated at the root,” the Assemblywoman said. “Only then will we begin to see the kind of America that we believe exists.”

Reports say US President Donald J. Trump has become more isolated than ever from the Republican Party, world leaders and the business community that once cautiously embraced him — a fissure that was growing for weeks but turned into a chasm following his response to the racist violence in Charlottesville.

Trump had to disband two corporate advisory councils  after a slew of chief executives resigned from the panels, according to the Washington Post.

It said they criticised the president for blaming both white supremacists and counter-protesters for the mayhem that led to the death of a 32-year-old woman.