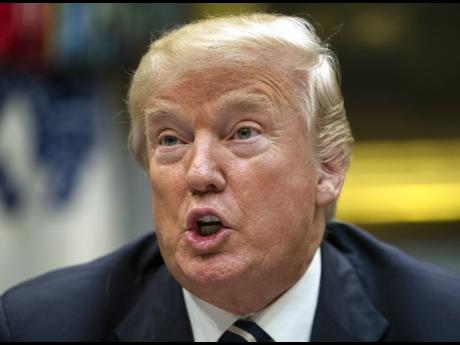 In this January 11 photo, President Donald Trump speaks during a prison reform roundtable in the Roosevelt Room of the Washington. - AP Photo

“Donald Trump’s disgraceful and disdainful rhetoric with regard to the fate of undocumented immigrants of African descent and his vulgar description of their homes of origin, demonstrate beyond the shadow of a doubt that Donald Trump is a racist,” Caribbean American Congresswoman Yvette D. Clarke told the Caribbean Media Corporation (CMC).

“It is evident, through repeated disparaging and defaming comments about Haiti and continental African nations, that his sentiments are truly a reflection of what he harbours in his heart and ultimately indicate his true intentions,” added Clarke, the daughter of Jamaican immigrants, who represents the 9th Congressional District in Brooklyn, New York.

“It is clear that he is not at all serious about developing constructive and humane policy to fix and mend our broken immigration system, but rather he has taken this opportunity to advance white supremacist ideology through his utterance in and from the White House,” she continued. “It has become painfully clear to Americans of good will that we can have no constructive conversations about DACA [Deferred Action for Childhood Arrivals], TPS [Temporary Protected Status], or family reunification with him, and this is truly unfortunate.

“It is a disgrace that the likes of Donald Trump would ever use such vile and disparaging language in the Oval Office and even more disgraceful that he has ascended to the highest office in the land,” Clarke said. “Donald Trump is disgrace to the Presidency and a disgrace to our nation.”

New York State Assemblywoman Rodneyse Bichotte, the daughter of Haitian immigrants, who represents the 42ndAssembly District in Brooklyn, said  as Haitians on Friday marked the 8th anniversary of the 2010 massive earthquake, it was sad that they were also united in denouncing the “distasteful, denigrating and disparaging racist remarks referring Haiti, Africa and other black or brown countries as ‘shithole’ countries.

“Although it has been eight years, the impacts of the earthquake are ever present. Unfortunately, on the eve of this commemoration the President of the United States decided to disparage this beautiful island [country] and other black and brown countries out of pure ignorance and disrespect to all of us as Americans,” Bichotte added. “As Americans and humans of this world, we demand an apology from President Trump for his demeaning remarks.”

She said Haiti has made significant contributions to the United States, including, helping win its independence by sending soldiers to fight in the Revolutionary War and World War II, discovering Chicago, and helping the US with the Louisiana purchase, among others.

“Americans should not accept such characterizations of who we are,” the Assemblywoman said. “We are not an America of hate. We are an America that is the land of the free and the home of the brave.”

“The United States was built off of the backs of those who migrated from a wide array of countries,” said Richardson, whose 43rd Assembly District in Brooklyn comprises large concentration of Haitians and people of African descent. “The audacity of our country’s leader to refer to other human beings in such a derogatory manner because of where they come from is unpalatable.”

New York City Councilman Jumaane Williams, the son of Grenadian immigrants, said “Donald Trump’s obscene, disgusting, racist comments about the nations of the world, and the people who come to America from those nations, left me appalled, but not shocked.

“I have come to expect this degree of vulgar bigotry from the man who sits in the Oval Office,” said the activist politician, who represents the 45th Council District in Brooklyn. “That Trump’s comments were made public on the evening prior to the anniversary of an earthquake that devastated the nation of Haiti makes them all the more disgusting, unfeeling and inhumane.

“Donald Trump had already made his bias against Haitians clear, having ended Temporary Protected Status for Haitians last year and reportedly making deeply insulting comments about the Haitian people that play into decades of hateful stereotypes,” Williams added.

“His comments seemed to disparage not only Haitians and African nations but all immigrants from black and brown countries, espousing a clear preference for white, European immigrants,” he continued.

Republican and Democratic Senators in Washington on Friday spoke out, as Trump tried to defend himself after reports that he questioned why the US would accept more immigrants from Haiti and “shithole countries” in Africa, rather than places like Norway.

But US Senator Richard Durbin, Democrat of Illinois, one of six lawmakers who were in the meeting Thursday, at the White House, on immigration with Trump, confirmed reports of the president’s remarks.

“To no surprise, the president started tweeting this morning, denying that he used those words,” Durbin said. “It is not true. He said these hate-filled things, and he said them repeatedly.”

US Senator Lindsey Graham, Republican of South Carolina, said in a statement that he had confronted Trump during the meeting, but he did not publicly condemn his remarks.

“Following comments by the president, I said my piece directly to him yesterday,” Graham said. “The president and all those attending the meeting know what I said and how I feel.”

Trump reportedly grew animated and exploded at the lawmakers during the White House sit-down as they presented a bipartisan deal to protect immigrants from Haiti, El Salvador and African countries, as well as the DACA programme.

New York Democratic Congressman Jerry Nadler and his Louisiana colleague Cedric Richmond said on Friday that they will introduce a resolution next week to censure Trump over his reported remarks.

The White House did not deny his comments on Thursday, which were first reported by the Washington Post, but issued a statement saying that Trump supports immigration policies that welcome “those who can contribute to our society.”

On Twitter, Trump was defiant, criticizing the immigration deal that was being discussed when he made his disparaging remarks, saying: “What was really tough was the outlandish proposal made - a big setback for DACA!”

Trump eventually denied that he singled out Haitians and rejecting reports that he told the group of lawmakers the US should “take them out” of the deal.