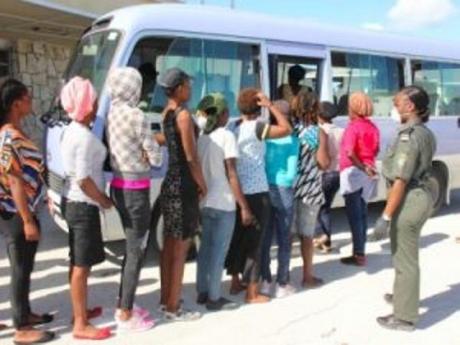 NASSAU, Bahamas, CMC – Over 100 Haitian nationals were repatriated to their homeland on Friday, as the Dr Hubert Minnis administration lifted the temporary suspension of deporting illegal Haitian migrants from the country.

On Thursday, the government announced that the deportations would resume as it was believed that the situation in Haiti was improving and on Friday morning, 112 Haitians left the island of New Providence aboard the national airline Bahamasair.

This was the second flight of this nature since the start of the year, with the first taking place on January 14, when 45 Haitians were sent home.

In a statement, the Ministry of Immigration of the Bahamas said the 112 Haitians included the 18 survivors of the boat that sank off the coast of the island of  Abaco on February 16; the 64 Haitian migrants recently apprehended in the Exumas and 30 people arrested in New Providence.

Meanwhile, the Ministry of Foreign Affairs informed that after consultations, the diplomatic and consular staff of the Bahamian Embassy in Port-au-Prince on Friday resumed their diplomatic and regular consular duties and officials would continue to monitor the situation on the ground.

Last week, the government temporarily ceased all deportations to Haiti as a result of the political unrest in the  French-speaking Caribbean Community (CARICOM) country.

Opposition political parties in Haiti have been staging street demonstrations in support of their calls for President Moise to step down, after accusing him of not investigating allegations of corruption in the previous government over PetroCaribe, an oil alliance of many Caribbean states with Venezuela to purchase oil on conditions of preferential payment.