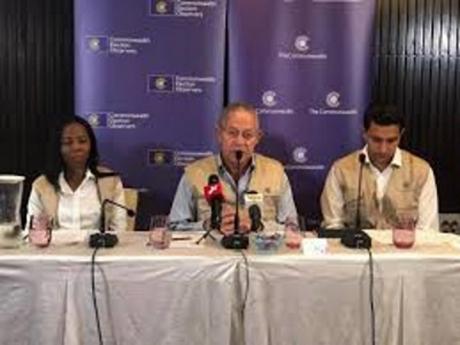 MALE, Maldives, CMC – Former Jamaica prime minister Bruce Golding Tuesday said he remains confident that the general election will provide an opportunity for the leadership of the Maldives and the newly constituted People’s Majlis to strengthen democracy in the country.

Golding, who headed a Commonwealth group that observed last Saturday’s general election, said that he wanted to commend voters “for the peaceful and orderly manner in which they exercised their democratic right to vote on 6 April.

“Once again, they have taken a step forward in consolidating their country’s democracy. We challenge the leaders they have chosen to spare no effort in realising their aspirations,” Golding told reporters.

“The results process is still underway. We encourage the people of Maldives to continue demonstrating the commendable patience, tolerance and collegiality they have shown so far, while they await the official results by the Electoral Commission,’ Golding added.

He said the Commonwealth group was “privileged” to have witnessed the “aspiration of a nation for a stable, peaceful and inclusive democracy where rights and responsibilities under the Maldivian Constitution and laws are fully respected.

The observers were deployed to various areas two days ahead of the elections where they observed the pre-election environment, the voting process and counting of ballots.

On the polling day, they observed that the polls generally opened on time; the signage providing relevant instructions to voters were visibly displayed; and that media officials, candidate representatives and citizen observers were present during the voting and counting period.

Golding recognised the greater engagement of women as polling officials but highlighted the low rate of women’s political participation as a recurring issue.

“Although women constituted a significant number of polling officials, only 35 out of the 386 parliamentary candidates for this election were women. We note the outgoing parliament had five women representatives out of 85 members,” he said.

This was the 11th parliamentary election in the Maldives.

More than 264,000 Maldivians were eligible to vote and elect 87 members to parliament using the first-past-the-post system.