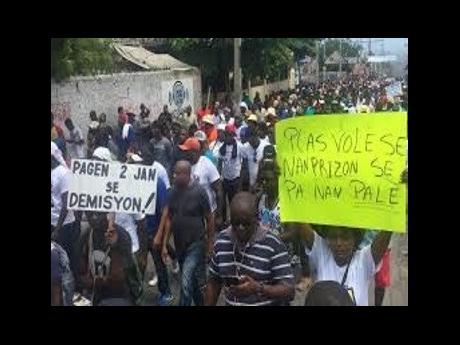 PORT AU PRINCE, Haiti, CMC – Police say at least two people were killed and several others injured as thousands took to the streets of the capital on Sunday demanding the resignation of President Jovenel Moise following the release of a report into the use of funds under the PetroCaribe initiative.

Police spokesman Michael-Ange Jeunes told reporters that the two people were shot while four others were wounded.

He said a police officer was also injured during the protests and that 12 people have been arrested.

The police spokesman said that similar protests were held in the cities of Jacmel, Cap-Haitien, Saint-Marc and Gonaives.

The protests organised by opposition political parties, led to the burning of tyres, the erection of roadblocks and fire being set to at least two buildings near the departmental police headquarters.

There were also reports of clashes between protesters and police near the presidential palace.

Police erected barricades near the presidential palace and fired tear gas to drive away demonstrators.

The protests follow the release of the 612 page reports of the Superior Court of Accounts and Administrative Litigation (CSC/CA) on the management of projects financed by PetroCaribe, an oil alliance of many Caribbean states with Venezuela to purchase oil on conditions of preferential payment.

In addition to the projects authorised by the 14 resolutions adopted by the Council of Ministers under six different governments, the Court had also examined investment projects and contracts related to the PetroCaribe fund, but not authorised by a resolution.

The audit found that significant shortcomings have been associated with the planning and implementation of development programmes and projects funded by the PetroCaribe Fund during the administration of former president Micel Martelly.

The Court made it clear that, overall, relevant documents were missing in most of the projects and contracts reviewed and as a result it was impossible to conduct a comprehensive audit of several projects.