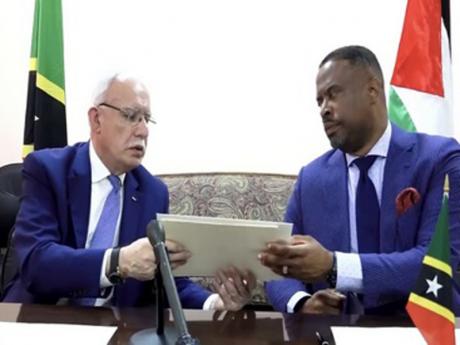 BASSETERRE, St Kitts, CMC – The St Kitts-Nevis government has defended its decision to establish diplomatic relations with Palestine saying “as a small nation, we are a friend to all and foe to none.”

Israel, with whom St Kitts-Nevis also has diplomatic relations, has so far not made any official statement on the political development, but Times of Israel quotes a government website as saying that Israel has maintained warm diplomatic relations with Basseterre since the early 1980s when the twin-island Federation declared independence from Britain.

The newspaper quotes St.Kitts-Nevis Foreign Affairs Minister, Mark Brantley, as saying that his country formally recognises the State of Palestine as a free, independent and sovereign state based on its 1967 borders and East Jerusalem as its capital.

Last week, Palestinian Foreign Minister Riyad al-Malki, on a visit to the twin island Federation, extended an invitation to Brantley to visit Palestine to witness first-hand, progress being made there despite ongoing difficulties.

In his statement, Bratley said St Kitts and Nevis is not involved in any way in the issues between Israel and Palestine “save that we encourage the parties to resolve outstanding issues peacefully.

“As a small nation, we are a friend to all and foe to none. That has been and continues to be the ethos of our foreign policy. We have long had great admiration for and enjoyed a strong relationship with the State of Israel and intend to work assiduously to deepen and strengthen that relationship.

“Equally, we hope to develop a relationship with Palestine and to lend our voice to a lasting peaceful solution in that region,’ Brantley said, adding that “in recognising Palestine, St Kitts and Nevis joins 138 other members of the United Nations.

“We will continue to advocate for inclusion rather than exclusion for all nations large and small,” he added.