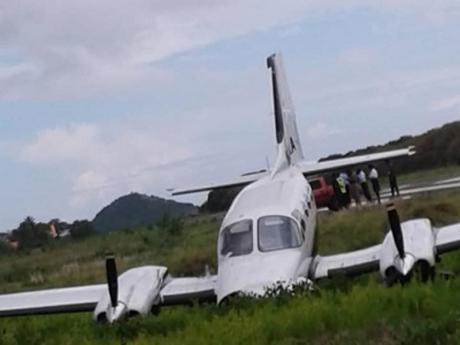 ST GEORGE’S, Grenada, CMC – All four persons, including the pilot, on board a twin-engine Cessna aircraft escaped injuries on Wednesday after the plane veered off the runaway at the Lauriston airport in Carriacou.

A Ministry of Tourism and Civil Aviation spokesperson said the private Cessna 421 flying from Piarco International Airport in Trinidad veered of “Runway 27 after landing”and that “initial reports indicate that the aircraft stopped about 120 feet east of the end of the runway.”

The spokesperson further said that medical officials as well as the Lauriston Fire department “provided the necessary support in accordance with the airport’s emergency protocols.

“All four persons on board, the crew and one passenger, were evacuated from the aircraft and safely transported to the Princess Royal Hospital for observation. No injuries were reported and they have all been discharged,” said the spokesperson.

It was indicated that the aircraft sustained “substantial airframe damage” and that the airport is currently closed pending the arrival of the inspectors from the Eastern Caribbean Civil Aviation Authority to conduct their investigations into the accident.”