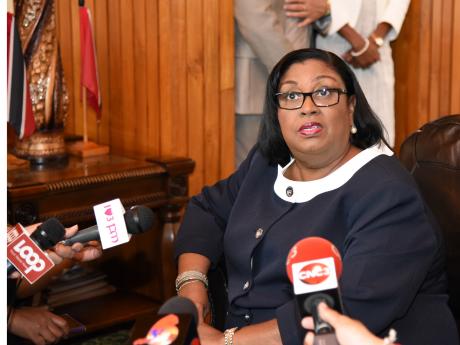 Elder said McDonald had been “exposed to a very long and comprehensive interview” by the police on Thursday and had been cooperating with law enforcement officials.

She said that while she is representing both McDonald and her husband, Michael Carew, she would only be speaking in relation to the government minister, who since the ruling People’s National Movement came to office in 2015, had been dismissed from the Cabinet on two occasions.

She said that “further interviews” would be conducted on Friday, adding “at present no charges have been laid, they are mere allegations that the police officers are investigating.”

She said the minister appeared to be “extremely tired” having been in police custody since the early hours on Thursday, adding “she has been fully cooperative with the police.”

In a brief statement on Thursday, the police said the minister and her husband had “been taken into custody…for questioning.”

“Enquires are ongoing at this time and more information will be provided when it becomes available,” the police said.

Meanwhile, the main opposition United National Congress said it notes with “grave concern” that a member of the government had been “arrested on allegations of corruption.

“The party notes that this matter is now before the police, and we await the outcome of the investigation. We live in a country where the rule of law obtains, and every citizen is entitled to due process, justice and fair play.

“However, the fact that a sitting PNM Government Minister is under active investigation over claims of misappropriation of public funds and is now being questioned by the police, is alarming,” the party said, noting that Prime Minister Rowley “has not made any statement on this very serious matter, he remains missing in action.”