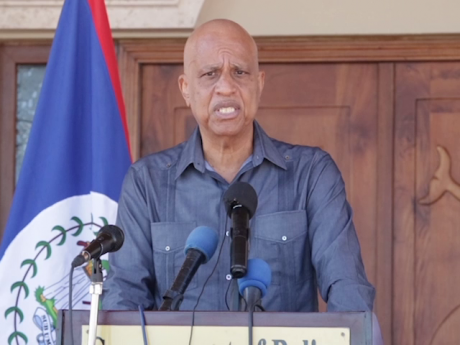 BELMOPAN, Belize, CMC – Governor General, Sir Colville Young, has declared a state of emergency for Ambergris Caye, the largest island of Belize, located northeast of the country’s mainland, after the country recorded its first case of the coronavirus (COVID-19).

Under the regulations, people on the island are expected to practice social distancing.

Travel to and from the island has also been prohibited for the next 72 hours and gatherings have also been limited to 10 persons at any given time within public and private spaces.

The authorities say anyone who comes down with flu-like symptoms and who may have had contact with someone afflicted with the virus must immediately inform the Ministry of Health.

Persons found in contravention of the regulations are liable for imprisonment for up to one year.

He said the oversight committee will look at possibly an even broader canvas and while he does not want to supersede the committee “I believe, it’s safe to say from now that bars, clubs, casinos, I don’t see how those can be allowed to continue to open.

“And insofar as grocery stores, supermarkets, there will have to be the monitoring on the part of the owners of these properties, personnel being stationed at the entrances to control the flow of customers and to ensure that there is a line outside, there is a distance between the persons forming that line,” Barrow said.

Barrow said that a Cuban Medical Brigade will arrive in Belize later this week via private charter from Guatemala City.

The team of doctors will be deployed to San Pedro in the first instance to provide medical assistance for persons suffering from COVID-19.

“There is help arriving for our medical frontline personnel. We have already chartered a couple of planes out of Guatemala, we wanted to use Tropic Air but they don’t have a big enough carrier.  They do have a plane that’s larger than the rest of the fleet but that would have involved something like four trips and it is sixty-one or sixty-two medical personnel that we are getting from Cuba, so we had to source charter flights out of Guatemala City via our embassy,” Barrow said.

“The bottom line is that there will be two flights, Wednesday and Thursday.  The larger of the two planes is the one that will be going to Havana on Wednesday, so the bulk of the medical personnel will be arriving on Wednesday and then the balance on Thursday. We’re going to house them at the Belize Biltmore Plaza Hotel.”