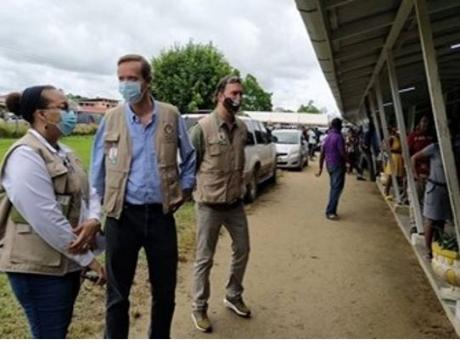 Members of the OAS observer team in Suriname - CMC photo

In a statement, the labour party said its leader, Dr Denzil Douglas, had on May 24 written to the hemispheric body urging it to send an observer mission after expressing its “most ardent disquiet” that he government is allegedly using the COVID-19 pandemic to “achieve an unfair political advantage in the upcoming general election.”

Douglas wrote that the measures include the announcement of the dissolution of the National Assembly less than 24 hours before coming into effect and the imposition of a six-month State of Emergency just prior to the announcement of general elections.

Douglas said that he hoped “the OAS will be actively observing the 2020 elections in St Kitts and Nevis”, adding “consequently, and in that hope, I look forward to an opportunity to discuss the issues raised herein with such a mission and to being afforded the space to amplify and support the points outlined.”

But in a statement, the labour party said that in response to the letter, newly re-elected OAS Secretary-General, Luis Almagro, confirmed that the body had accepted a May 19 invitation by Harris for the organisation to deploy an Electoral Observation Mission to the twin-island federation.

According to the Secretary-General’s May 28 letter, “the team of observers, which is currently observing the post-electoral phase in Suriname, was expected to travel to St Kitts and Nevis. Funding for the mission had been secured and the team had been cleared of COVID-19 after the team had been repeatedly tested in Suriname”.

But the party said that the OAS was informed by the government in a letter dated May 27 “ that following the establishment of a 14-day quarantine, it would not be feasible for the observer mission to travel to St Kitts and Nevis”.

Almagro in his letter to Douglas said that “OAS/GS regrets that a practical solution was not put in place like was the case in Suriname to allow our observers to deploy, but is respectful of the sovereign decision.”

Douglas said it was important for the regional and international community be informed of the decision of the Harris administration, saying he is “very, very concerned that something sinister is being planned.

“This is further vindication of our court action to bring an end to the unconstitutional state of emergency as evidence mounts that it is being used by Harris for an evil purpose and to give the administration an unfair advantage in the upcoming elections”, Douglas added.

Harris, who will lead his the-member coalition Team Unity into the elections, is yet to respond to the allegations.