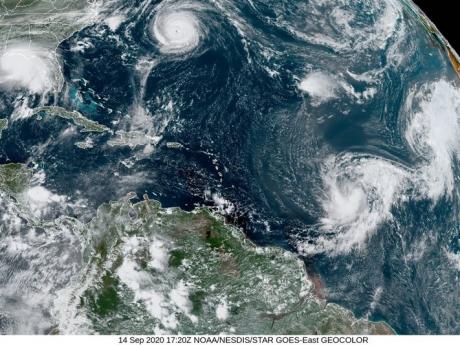 This satellite image provided by the NOAA shows five tropical cyclones churning in the Atlantic basin at 5:20 p.m. GMT on Monday, September 14, 2020. The storms (from left) are Hurricane Sally over the Gulf of Mexico, Hurricane Paulette over Bermuda, the remnants of Tropical Storm Rene, and Tropical Storms Teddy and Vicky. (NOAA via AP)

SAN JUAN, Puerto Rico (AP) — Hurricane Paulette knocked down trees and power lines across Bermuda on Monday as it made a rare landfall in the wealthy British territory and strengthened into a Category 2 storm while still over the island.

Government officials said in a press conference that there were no reports of deaths, injuries or serious property damage and noted that two boys were born at the height of the storm.

Fewer than 10 hurricanes have made direct landfall on the tiny island in the middle of the Atlantic since the National Hurricane Center began tracking such disasters in the 1850s.

“We have managed to make it through this very serious hurricane,” said National Security Minister Renee Ming.

Paulette was centred 275 miles north-northeast of Bermuda Monday night and was heading northeast toward open water at 17 miles per hour.

It had maximum sustained winds of 105 miles per hour, according to the centre.

Ming had urged people to stay indoors and reminded the more than 70,000 people who live on the island to protect themselves given the COVID-19 pandemic.

Some 50 people sought refuge at a government shelter, and up to a third of the power company’s clients were without electricity at one point.

Bobbi Singh, who has lived in Bermuda for eight years, told The Associated Press that while she has been through a few hurricanes, every storm brings concerns.

“The biggest challenge was preparing in the midst of COVID-19,” she said. “It gave us more the think about when heading out to get supplies in crowded places.”