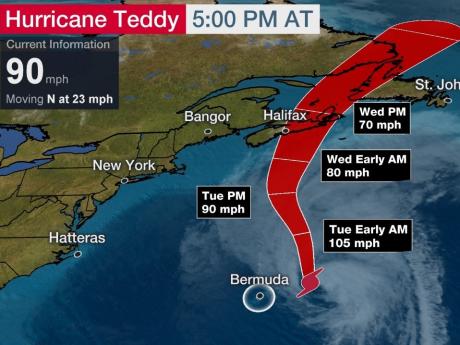 The hurricane lost strength in its approach and dropped to a Category 1 storm as it headed to Nova Scotia, which was under a tropical storm warning from Digby to Meat Cove.

A tropical storm watch was issued for the Magdalen Islands, from Meat Cove to Tidnish, north of Digby to Fort Lawrence and from Port aux Basques to Francois, Newfoundland.

It had maximum sustained winds of 90 miles per hour and was moving north-northeast at 23 miles per hour, according to the US National Hurricane Center in Miami.

Hurricane Teddy was generating large swells across the U.S. Atlantic coast and northern Caribbean, with officials in Puerto Rico reporting two drownings and the rescue of one boogie boarder.

The storm also knocked out power to more than 200 clients across Bermuda and forced the government the close all air and sea ports, schools and government offices for the second time in a week.

They are scheduled to reopen on Tuesday.

Hurricane Paulette made landfall in Bermuda on September 14 as a Category 1 storm and then strengthened into a Category 2, knocking down trees and leaving thousands without power.