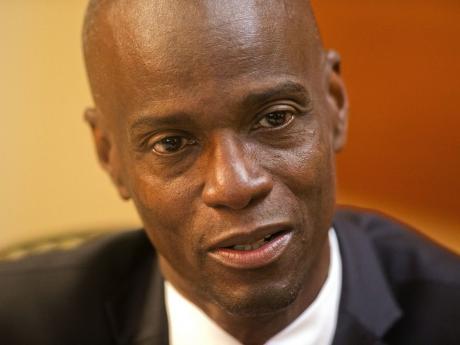 In this February 7, 2020 file photo, Haiti's President Jovenel Moïse speaks during an interview at his home in Petion-Ville, a suburb of Port-au-Prince, Haiti. Haiti is bracing for a fresh round of widespread protests starting Friday, January 15, 2021, with opposition leaders demanding that Moise step down next month, worried he is amassing too much power as he enters his second year of rule by decree. (AP Photo/Dieu Nalio Chery, File)

“The priority right now is to put in place another economic, social and political system,” André Michel, of the opposition coalition Democratic and Popular Sector, said by phone.

“It is clear that Moïse is hanging on to power.”

They claim that Moïse’s five-year term is legally ending — that it began when former President Michel Martelly’s term expired in February 2016.

But Moïse maintains his term began when he actually took office in early 2017, an inauguration delayed by a chaotic election process that forced the appointment of a provisional president to serve during a year-long gap.

Haiti’s international backers have echoed some of the opposition’s concerns, calling for parliamentary elections as soon as possible.

They were originally scheduled for October 2019 but were delayed by political gridlock and protests that paralysed much of the country, forcing schools, businesses, and several government offices to close for weeks at a time.

One of those limited the powers of a court that audits government contracts and had accused Moïse and other officials of embezzlement and fraud involving a Venezuelan programme that provided cheap oil.

Moïse and others have rejected those accusations.

Moïse also decreed that acts such as robbery, arson, and blocking public roads — a common ploy during protests — would be classed as terrorism and subject to heavy penalties.

He also created an intelligence agency that answers only to the president.

The Core Group, which includes officials from the United Nations, US, Canada, and France, questioned those moves.

“The decree creating the National Intelligence Agency gives the agents of this institution quasi-immunity, thus opening up the possibility of abuse,” the group said in a recent statement.

“These two presidential decrees, issued in areas that fall within the competence of a Parliament, do not seem to conform to certain fundamental principles of democracy, the rule of law, and the civil and political rights of citizens.”