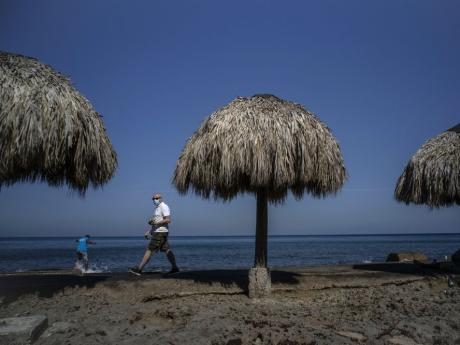 A tourist, wearing a protective face mask amid the coronavirus pandemic, walks along the beach shore in Havana, Cuba, Tuesday, March 2, 2021. The Caribbean is hunting for visitors and vaccines to jump-start the stalled economy in one of the world’s most tourism-dependent regions (AP Photo/Ramon Espinosa)

SAN JUAN, Puerto Rico (AP) — The Caribbean is hunting for visitors and vaccines to jump-start the stalled economy in one of the world’s most tourism-dependent regions.

Clear waters and warm sand attracted a record 31.5 million tourists to the Caribbean in 2019, but visits plummeted by an estimated 60% to 80% as the pandemic hit last year.

That’s devastating for a region whose countries depend heavily on visitors for income.

Tens of thousands of tourism-related jobs were lost, including those held by Nadia Kidd and her mother in Jamaica.

Kidd, 31, was a waitress at a resort and her mother worked at a guest house.

Kidd, like many other workers, has yet to receive her severance pay and now runs a tiny grocery store out of her home to support her mother and daughter.

“Everything is all on me,” said Kidd, who worked at the Meliá Braco Village resort in Trelawny.

“I have loans to pay, light bill, and Internet [that I] have to pay because my daughter has to go to school online.”

Desperate to create safe conditions for tourism, the Caribbean is turning to India and China for vaccines at a time when global supplies are strained and richer nations are ahead of them in line for shots from other sources.

A few have been fortunate to get quick shipments, while others could wait weeks, if not months.

The Caribbean saw COVID-19 levels rising in November, along with variants feared to be more contagious.

More than 522,000 cases and more than 7,500 deaths have been reported in 35 of the region’s countries and territories.

“The rate of increase has been alarming,” said Dr.Joy St. John, executive director of the Trinidad-based Caribbean Public Health Agency.

The small nations adopted a variety of anti-virus measures, nearly all requiring visitors at a minimum to show recent negative tests upon arrival.

Cuba — the largest Caribbean nation and the only one working on its own vaccines — choked off arrivals after seeing infections surge. It requires visitors to stay in designated hotels and to take new tests upon landing.

Many islands ask visitors to isolate, though how long and under what conditions can vary: Those arriving in the Cayman Islands or Barbados must stay inside a hotel for at least a week or face jail. Others, like Puerto Rico, don’t require quarantine if a negative test is presented upon arrival, and tourists can roam the U.S. territory’s beaches and forests.