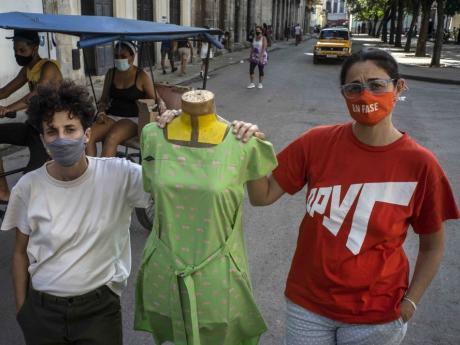 Idania Del Río (left) and Leire Fernández, owners of Clandestina, pose with a mannequin dressed in clothes they created, outside their store in Havana, Cuba, February 18, 2021. Tourists poured through their shop until the Trump administration turned off the taps that had been opened just a few years before by then-President Barack Obama. Today, the doors swing open less often, with tourism choked both by US sanctions meant to punish Cuba's government and a pandemic that has squashed tourism almost everywhere. (AP Photo/Ramon Espinosa)

HAVANA (AP) — Business was booming for a trendy little clothing shop called Clandestina in the heart of Old Havana, one of thousands of new private businesses that had arisen in what was once a near-wholly state-run socialist economy.

A torrent of tourists poured through the doors to pick through bags, sweatshirts, camisoles, and caps — at least until the Trump administration turned off the taps that had been opened just a few years before by then-President Barack Obama.

Today, those glass-and-wood doors swing open less often, with tourism choked both by US sanctions meant to punish Cuba’s government and a pandemic that has squashed tourism almost everywhere.

With their business tottering, Clandestina’s owners — Idania Del Río and Leire Fernández — subsist on hope that new US President Joe Biden will reverse at least some of the restrictions implemented by his predecessor.

In 2010, in an attempt to energise the island’s sluggish, top-down economy, then-President Raúl Castro promoted an unprecedentedly broad opening to the private sector, allowing hundreds of sorts of small businesses — restaurants, shoe repairers, small clothing workshops and more — that have grown to employ some 600,000 people.

Some of the most successful targeted a surging number of tourists — part of another government opening meant to save the economy.

Tourism got a huge boost at the end of 2014 when Obama announced a historic thaw of relations with Cuba, arguing that five decades of US sanctions against communist governments had failed and that more vibrant ties would do more to help the Caribbean nation’s people.

Clandestina launched in 2015 about five blocks from the country’s capitol building — modelled on the one in Washington — just in time to fill its sails with the breeze from the US opening.

Biden has long said that he would reinstate at least some of Obama’s policies toward Cuba.

His advisers have spoken of eliminating Trump-era restrictions on remittances sent by Cubans in the US to their homeland and on travel.