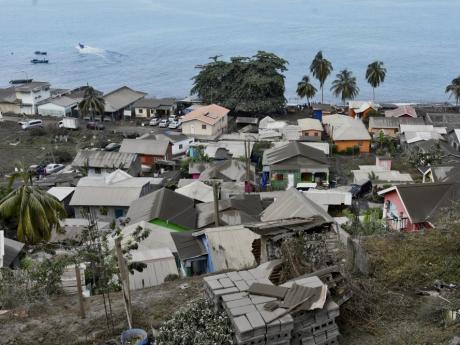 Volcanic ash covers the roofs of homes after the eruption of La Soufrière volcano in Wallilabou, on the western side of the Caribbean island of St Vincent, Monday, April 12, 2021. La Soufrière fired an enormous amount of ash and hot gas early Monday in the biggest explosive eruption yet since volcanic activity began late last week. (AP Photo/Orvil Samuel)

SAN JUAN, Puerto Rico (AP) — Ongoing volcanic eruptions have displaced about 20% of people in the eastern Caribbean island of St Vincent as a United Nations official on Wednesday warned of a growing humanitarian crisis.

Between 16,000 to 20,000 people were evacuated under government orders before La Soufrière volcano first erupted on Friday, covering the lush green island with ash that continues to blanket communities in St.Vincent as well as Barbados and other nearby islands.

About 6,000 of those evacuees are considered most vulnerable, said Didier Trebucq, United Nations resident coordinator for Barbados and the Eastern Caribbean.

“So we are facing a situation with a great deal of uncertainty, and also a humanitarian crisis that is growing and may continue for weeks and months,” he said.

Trebucq said that based on certain information and preliminary estimations, 20,000 people are “estimated at risk of food insecurity, given the loss of the assets in terms of livelihood like fisheries, or agriculture.”

Some 4,000 people are temporarily living in 87 government shelters, while others have relocated to hotels or the homes of friends and family, officials said.

Trebucq noted that many shelters are lacking basic services including drinking water.

He said priority number one is water, which is being transported from nearby Caribbean nations and other contributors since water systems shut down in many parts of the island.

He said priority number two is meeting the needs of the 4,000 people in shelters, including cots and basic supplies, sanitation, hygiene and emergency latrines.

“We are dealing with a crisis within the COVID crisis,” Trebucq told reporters at UN headquarters in New York in a video briefing.

“Many health facilities have been affected by the ashes.”

“We cannot have that at any time, and most of all, at this time,” he said.

He also said a big issue is trying to determine the needs of those staying in hundreds of private homes across the island, adding that registration of those evacuees is ongoing.

Officials also urged those remaining in communities closest to the volcano to evacuate as soon as possible, noting that the explosions are ongoing and causing new pyroclastic flows.

“I don’t want them to die like that,” said Richard Robertson with the University of the West Indies’ Seismic Research Centre.

Friday’s explosion produced only ash, but pyroclastic flows have multiplied as the volcano shifts shape with each new eruption, some of which have been stronger than the one recorded last week.

Robertson said volcanic activity is expected to continue for days or even weeks.

Water continues to be of great concern, although Garth Saunders, minister of the island’s water and sewer authority, said Wednesday that the situation is improving and that more water supply systems are coming back on.

He added that crews are prioritising bakeries so people can have basic sustenance.

Trebucq said the UN will soon be launching an emergency appeal to support the humanitarian response and the early recovery for the next six months.

He said the goal is to ensure people’s lives go back to normal as soon as possible, but that he worried about the impact on the island’s tourism and agricultural sectors.

The UN is mobilising experts through the UN Environment Programme in collaboration with the European Union to help remove and dispose of the ashes, he said.

“This is a crisis that is going to certainly last more than six months in St Vincent and other islands,” he said.