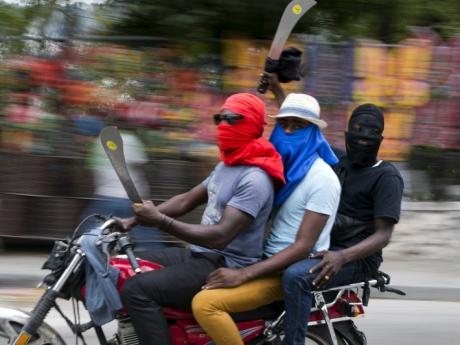 In this February 24, 2020 file photo, men on a motorcycle brandish machetes as off-duty police officers protest over pay and working conditions in Port-au-Prince, Haiti. A surge in violence is rattling Haiti. At least four police officers were killed in March 2020 during a failed raid on the stronghold of a criminal gang so bold it held the cops' bodies hostage. (AP Photo/Dieu Nalio Chery, File)

PORT-AU-PRINCE, Haiti (AP) — The attack was brazen, streamed live on the Internet: Men carrying big guns walked into a Holy Thursday church service, grabbed the pastor and three parishioners and led them away in full view of cameras.

For Haitians, it was a fearsome emblem of a wave of kidnappings and deaths that have victimised even impoverished people already stung by years of violence in the streets.

One of the church abductees, Steven Jérôme, spent the first night in the hands of his captors sitting on a chair afraid to close his eyes.

Meanwhile, parishioners and relatives of the victims like Jérôme’s sister, Suze, scrambled to gather money to free them.

“People gave 10 gourdes, 15 gourdes, whatever they had,” she told The Associated Press, referring to donations that amounted to 13 to 19 US cents.

The victims of the April 1 kidnapping at the Gospel Kreyol Ministry were relatively fortunate; they were freed nearly three days later.

But Jérôme and others remain traumatised and their relatives find themselves in debt, some pushed deeper into poverty, after paying a ransom.

And the police seem overwhelmed.

At least four police officers were killed last month during a failed raid on the stronghold of a criminal gang so bold it’s still holding the bodies of the cops hostage, helping spawn a revolt within police ranks.

A couple of days later, then-Prime Minister Joseph Jouthe mentioned at a news conference that ransoms can range from $300,000 to $1 million.

Haiti is a country of 11 million people where about 60% earn less than $2 a day.

A recent report by the UN Integrated Office in Haiti recorded 234 reported kidnappings in 2020, up from 78 a year earlier.

Reported homicides rose as well. Police statistics are unreliable, but authorities reported 1,380 killings last year, with the UN noting it was a 20% increase from the prior year.

Victims included a judge and the president of Port-au-Prince’s Bar Association.

The escalating violence prompting businesses, banks, and schools across Haiti to shut this week in a protest they dubbed “Black Thursday.”

Some schools have temporarily closed because of dangerous neighbourhoods.

Recent victims have included five priests, a hospital director, elementary school children, and a member of the president’s security unit.

There’s no exemption for poverty.

Escalating violence led the US Embassy in Haiti to issue a recent statement calling on Haiti’s government “to protect its citizens and intensify its efforts to bring those responsible to justice.”

The Organization of American States has issued a similar plea.

The administration of President Jovenel Moïse says it has arrested gang members, increased police presence, and created a task force to dismantle gangs.

Local police spokespeople did not return calls for comment, but Serge Therriault, police commissioner of the UN Integrated Office in Haiti, acknowledged there was “a greater perception of insecurity and violence today,” even if the amount of regular street violence is comparable to previous years.

The spike in violence also is disrupting efforts to distribute aid for a country still recovering from a devastating 2010 earthquake, a deadly cholera outbreak, and now the pandemic, said Pamela White, a former US ambassador to Haiti.

“It’s very hard to do when a country is rolling in violence constantly, every day,” she said.

Prime Minister Claude Joseph told the AP that he blamed the increased violence on unpopular political factions he said were trying to undermine general elections scheduled for September.

Whatever the cause, the violence has disrupted lives across Haiti.