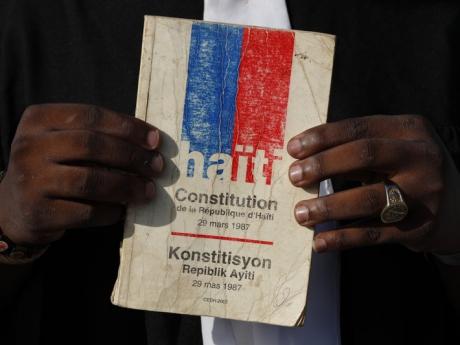 In this October 8, 2019, file photo, entrepreneur and youth leader Pascéus Juvensky St. Fleur holds up his copy of the Haitian constitution during an interview in Port-au-Prince, Haiti. (AP Photo/Rebecca Blackwell, File)

PORT AU PRINCE, Haiti, CMC – Haiti has announced the postponement of the constitutional referendum that was originally scheduled for June 27.

While the authorities have not disclosed a new date for the referendum that had been criticised by the opposition, officials are blaming a significant increase in the number of coronavirus (COVID-19) cases as well as the renewal of the state of health emergency by the Executive on May 31.

The Provisional Electoral Council said that after consultations with the authorities of the Ministry of Health and several meetings with the members of the scientific unit, it felt obliged to postpone “sine die” the constitutional referendum of June 27.

“Consequently, a new calendar of referendum and electoral activities will be adopted and published by the council after the recommendations of the health authorities and the technical opinions of the executives of the electoral institution,” said the council's president Guylande Mesadieu.

An official statement said the decision to postpone was motivated by “difficulties” the electoral council faced as it tried “to assemble and train all the temporary staff for the realisation of the poll” in the face of the pandemic.

A new date would be set “after the recommendations of the health authorities and the technical advice of the executives of the electoral institution,” it said.

Haiti has recorded 325 deaths and 15,435 positive cases of the virus since the first case was detected in March last year.

The constitutional referendum would have been the first referendum in the country since 1987.

It was unilaterally proposed by the Jovenel Moïse administration even as the opposition maintained calls to boycott the event.

Moïse had said that the referendum was necessary as the government moves to reform the constitution.

He has been facing calls for his resignation and has been ruling by decree after legislative elections due in 2018 were delayed and following disputes on when his own term ends.

The presidential, legislative, and local elections are scheduled for September.