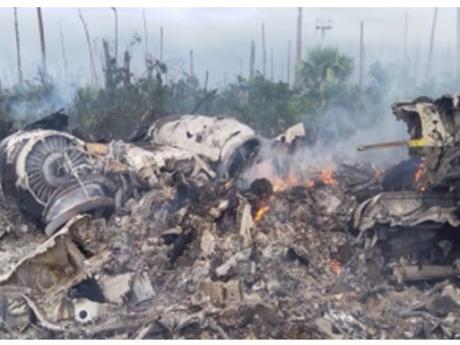 Police said the aircraft, an IAI Westwind, was engulfed in flames when rescue teams arrived at the crash site - Contributed photo.

NASSAU, Bahamas, CMC – A team from the Air Accident Investigation Authority is expected to be deployed to Treasure Cay on Tuesday after two people were killed when a jet crashed in bushes near the Treasure Cay International Airport in Abaco late on Monday.

Police said the aircraft, an IAI Westwind, was engulfed in flames when rescue teams arrived at the crash site.

“Initial inquiries revealed that the airplane was observed taxiing and a short time later, smoke and flames [were] seen coming from the airplane,” police said.

“Two pilots [were] on board the airplane when it crashed. Further checks were made and there were no signs of life on board.”

Their nationalities were not immediately known.

Assistant Superintendent of Police, Stephen Rolle, said the bodies were burned beyond recognition and Tourism and Aviation Minister Dionisio D'Aguilar said the plane had arrived on Abaco from the Dominican Republic last Friday.

“It dropped off, I presume, some foreign visitors; I'm not sure who,” he told The Guardian newspaper, adding “the plane then filed a flight plan to fly from Treasure Cay to Nassau. We don't know the intention, but it probably was to refuel. In taking off, the plane crashed.”

The newspaper said that a video, which was recorded by Pastor Silbert Mills, an Abaco resident, showed a plume of smoke rising from flames at the crash site.